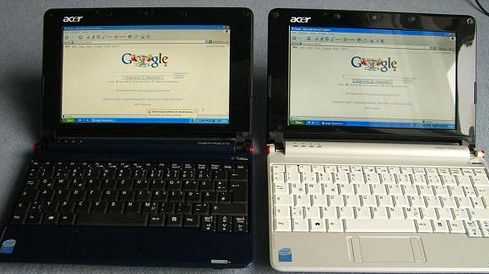 The Acer Aspire One A110L and A150L look a lot alike on the outside. But inside, the A150L packs a 120GB hard drive while the A110L has an 8GB solid state disk. As we learned yesterday, solid state disks may be more durable than hard drives and consume less power, but they’re not always faster. And a member of the Eee PC News.de forums has confirmed these facts by comparing the two Aspire One models.

The results? My German’s not too good and Google Translate isn’t much better, but if I have this right, here are a few highlights:

The different in battery life was nominal. Using both models, the tester was able to get between 2:30 and 2:50 of run time. With the A150L selling for just a few bucks more than the A110L the choice between one version and the other seems like a no brainer if you plan to install Windows XP or another operating system. But if you plan to stick with Linpus Linux Lite and don’t need the additional 72GB of storage capacity, it sounds like the A110L might be the better choice.

Update: As Zeroed points out in the comments, some of these tests were performed with an upgraded A150L with a 32GB solid state disk. So the results probably won’t apply to an off-the-shelf unit.