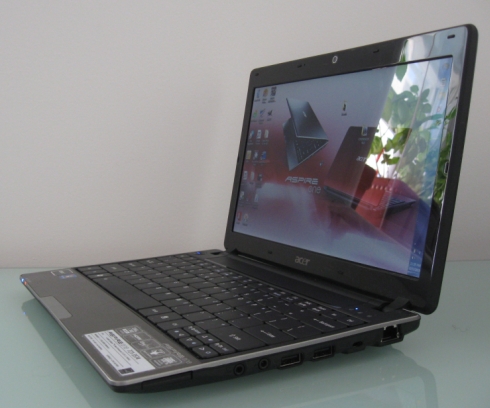 Acer sent me an Aspire One 721 to review, and the specs are quite similar to those of its smaller cousin. But the case is bigger, the display can handle more pixels, and the laptop comes with a more powerful version of Windows 7. On the other hand, despite the larger keyboard, the touchpad appears to be the same size on both models, and the battery doesn’t last quite as long on the Aspire One 721.

Acer has been pumping out 11.6 inch laptops for a while at this point, and the company does a pretty good job with this form factor.This laptop measures just 1.1 deep at its thickest point. It’s 11.2 inches wide and 8 inches deep, and weighs about 3.1 pounds with a 6 cell battery. 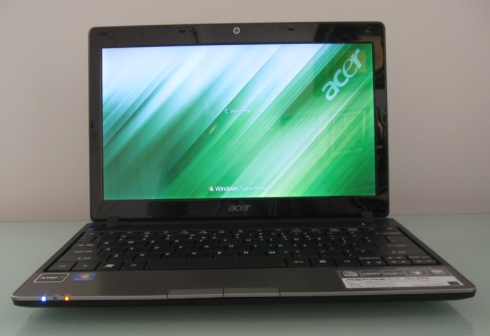 The standard Acer keyboard features wide keys which stretch nearly from one edge of the computer to the other. There’s only a single button above the keyboard, for turning the computer on and off, but there are a few status LEDs showing disk activity, number, and Caps lock status above the right side of the keyboard.

There are three more status lights near the front of the laptop showing whether the computer is powered up, the battery is charging, and the WiFi is on. 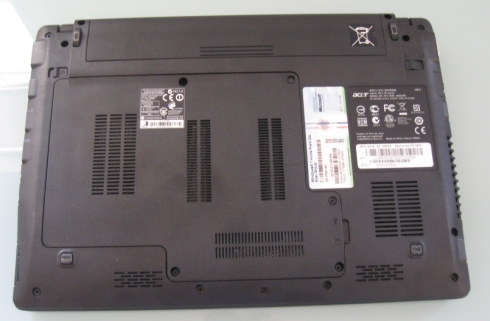 The bottom of the Aspire One 721 features one large access panel which you can remove to upgrade the memory or hard drive. There are two RAM slots, which makes doubling your available memory as easy as dropping in another stick. 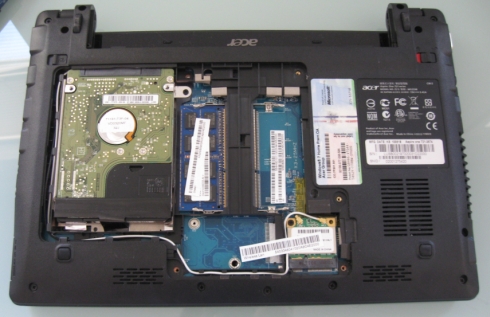 The demo unit Acer sent me came with a single 2GB stick of RAM, and the computer supports up to 4GB. The wireless module is also accessible, as is a spare PCIe slot, which should make it easy to add other components to the laptop if that’s your sort of thing.

Around the sides of the laptop you’ll find 3 USB ports, HDMI and VGA outputs, Ethernet, mic and headphone jacks, as well as an SD card reader.

Like the Acer Aspire One 521, the Aspire One 721 has a glossy display which is visible from multiple angles, but which looks best when viewed head-on. It also reflects a bit of glare in bright settings, but I didn’t have any problems seeing the screen when working in my office with bright sunlight shining in through the windows. I wouldn’t expect the laptop to be much use if I carried it outdoors, though.

The screen can tilt back so far that it can almost touch the table.

The keyboard features large flat keys with little space in between them. Honestly, I found the keyboard a bit uncomfortable at first, because I couldn’t always feel the edge of a key with my fingertips without looking down. But when I took an online typing test, I scored about 105 words per minute, which is above my average speed, so apparently I didn’t have too many problems typing on the keyboard. 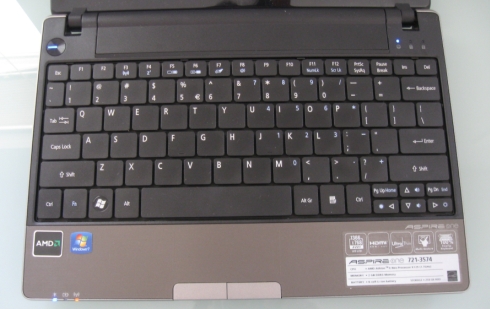 I’m not a huge fan of the cramped Arrow and PgUp/PgDn keys in the lower right side of the keyboard. I tend to use these keys a lot when surfing the web or writing, and I prefer notebooks that make these keys full sized. 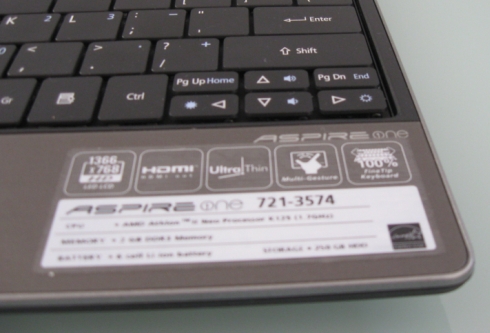 I could almost forgive Acer for putting these six keys in a space that’s just larger than two normal sized keys on a smaller machine like the Aspire One 521. I don’t see any good reason for it on an 11.6 inch computer which, for the most part, has a full sized keyboard. 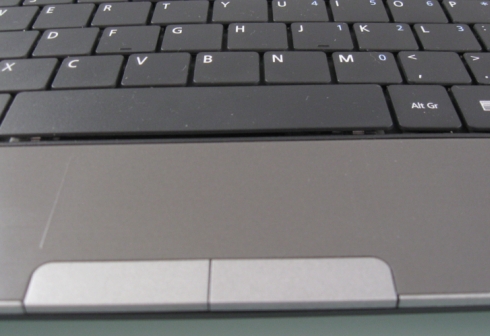 The touchpad is almost exactly the same size as the one on the 10 inch Aspire One 521. That is to say, it’s just barely large enough for comfortable use.

Since the battery sits flush with the back of the computer, taking up some space above the keyboard, there really isn’t much room for a palm rst area. So I suppose it would have been tough to make the touchpad much higher. But it would have been nice if Acer had made it a little longer.

That said, the touchpad is quite responsive and supports multitouch gestures including two-finger scrolling and pinch-to-zoom.

I reviewed the Aspire 1410 before I started running third party benchmarks such as 3DMark06 on laptops, so I can’t make an apples to apples comparison on graphics capabilities. But while both models were able to handle 1080p HD video playback, the Acer Aspire One 721 fares much better than other notebooks I’ve tested with Intel GMA 4500MHD graphics.

In terms of CPU performance, the older Aspire 1410 was a bit faster at transcoding a video file, but in other tests including audio transcoding and creating a large zip file containing over 2,000 smaller files, the Aspire 721 had the edge. Overall performance for CPU-intensive tasks seems to be about even. 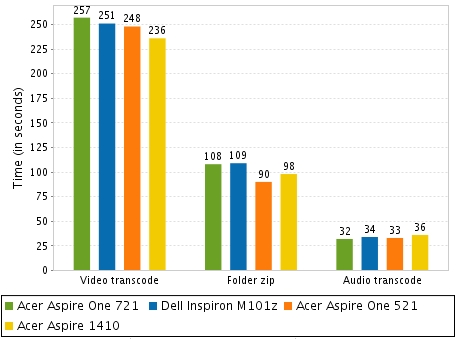 The Aspire One 721 fared about as well on these tests as other machines with the AMD Neo K125 CPU, including the Dell Inspiron M101z and Acer Aspire One 521.

I also ran the 3DMark06 benchmark to check out CPU and graphics performance, and pitted the Aspire One 721 against several other laptops in the dreaded chart mashup. The results? Surprisingly, the 10 inch Aspire One 521 scored noticeably higher in this test. But so did the Asus Eee PC 1201N with NVIDIA ION graphics and a dual core Atom 330 CPU. 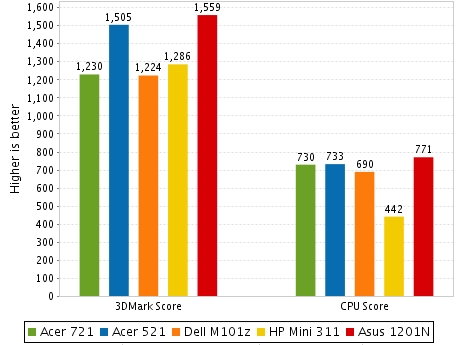 But the Acer Aspire 721 did hold its own in the 3DMark06 test, scoring about as well as the Dell Inspiron Mini M101z with ATI Radeon HD 4225 graphics and the HP Mini 311 with a single core Atom N270 CPU and NVIDIA ION graphics.

The key point to remember here is that none of these budget ultraportable laptops are really designed to be gaming machines. When I ran the Street Fighter 4 benchmark, I was only able to eke out between 11 and 14 frames per second, depending on the settings. You’re not going to want to play bleeding edge games on the Acer Aspire 721. But it should do a respectable job with some older or less resource-heavy games.

The demo unit I received came with a 6 cell, 4400mAh, 49Whr battery. According to Aer some models may be availabel with higher capacity 5800mAh batteries. 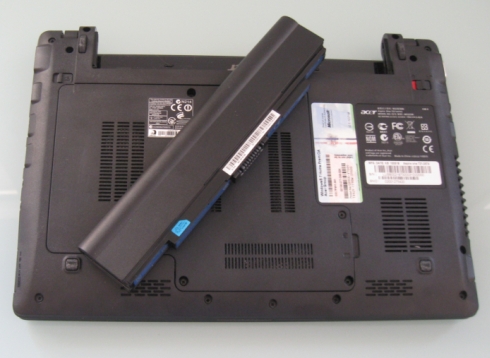 In everyday use I was able to get between 4 and 5 hours of run time out of the battery. This typically involved light web surfing over WiFi, watching a few YouTube videos, and writing a few documents. The Aspire One 521, which had the same battery, ran for about a half hour longer. But that model also had a smaller, lower resolution display which likely consumed less power.

While there are plenty of other 11 to 12 inch laptops available which offer better battery life, up to 5 hours of run time really isn’t all that bad considering the level of performance you get from this $430 laptop.

The Acer Aspire One 721 isn’t the fastest 11.6 inch laptop I’ve tested. It doesn’t have the best graphics performance. And it doesn’t have the longest battery life. But it’s among the best performing laptops I’ve tested in its class, which is saying a lot since this machine is so much cheaper than the competition. 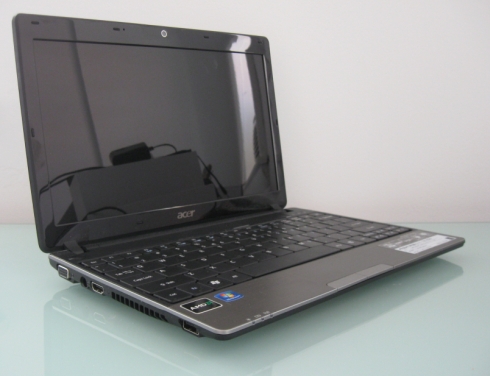 For $430, you get a machine with graphics that are about as powerful as first generation NVIDIA ION graphics. The CPU is much more powerful than a typical Intel Atom processor, which shaves time off of CPU-intensive tasks such as transcoding audio and video files. More importantly, I didn’t notice any slowdown in day to day activities such as web surfing, watching videos, or generally multitasking and pretending I can actually concentrate on 3 or 4 things at once half as well as my computer can.

The only down side is the substandard battery life. A few years ago if you’d told me I could pick up a 3 pound, 11.6 inch laptop with a battery that runs for more than 4 hours, I would have been ecstatic. Today I’ve come to expect better. Still, with a $430 price tag, you might just want to consider picking up this cheap mini-laptop and keeping an eye out for a bargain on a spare battery.