Acer is getting ready to launch the 14 and 15 inch ultrabooks the company introduced at CES in January. At the time Acer was calling the thin notebooks Timeline Ultra, but when they launch in the UK in June they’ll be called Acer Aspire M5 ultrabooks.

There’s no word on the pricing yet. 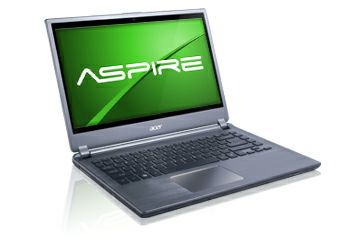 Both the 14 and 15 inch models will measures about 0.8 inches thick and feature optical disc drives, backlit keyboards, and Intel Ivy Bridge processors as well as the usual ultrabook goodies including the ability to resume from sleep in under 2 seconds.

On the other hand, the notebooks weigh about 5 pounds — making me question my working definition of the word “ultrabook.”

Acer will take advantage of the extra space on the 15 inch model to throw in a numeric keypad — something you don’t see very often on ultrabooks.

The notebooks will come with a choice of a solid state disk or a hybrid storage solution with a large hard drive and a small solid state disk that will cache system files for improved performance.

Acer says the ultrabooks will offer up to 8 hours of battery life.

If you’re looking for a notebook with an Ivy Bridge processor, quick boot speeds, and long battery life and don’t want to give up the optical disc drive, the M5 series looks interesting. But I find it hard to put computers with 14 and 15 inch displays that weigh 5 pounds in the same category as the HP Envy Spectre XT or Asus UX31 Zenbook.

Acer is also expected to launch the Aspire S5 ultrabook in June. That model features a 13.3 inch display and measures less than 0.6 inches thick and weighs less than 3 pounds.