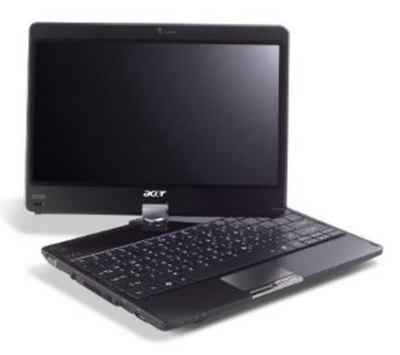 Acer has been teasing us with an 11.6 inch convertible tablet with a low power Intel CULV processor for months — but it hasn’t been widely available for purchase yet. Now it looks like you can pick up an Acer Aspire 1825PTZ Tablet from Amazon.de in Germany, where it’s in stock and shipping.

The 599 Euro price tag may seem a bit steep at first. That’s about $808 US. But what you get for the money is an 11.6 inch portable laptop with a 1.3GHz dual core Pentium SU4100 processor, 4GB of RAM, 320GB hard drive, and Windows 7 Home Premium. Oh yeah, and you can fold the capacitive multitouch screen down over the keyboard for use in tablet mode.

I have high hopes for this notebook. Many of the convertible tablets I’ve tested in the past few months have shipped with Windows XP or Windows 7 Starter Edition — which aren’t really optimized for multitouch gestures. They have also tended to have low power Intel Atom processors, and I’m starting to think that you might need a faster CPU in order to handle Windows in tablet mode, since most of these machines have felt a little sluggish when performing certain actions such as rotating the display. While the Pentium SU4100 isn’t exactly a high performance chip, it is significantly more powerful than an Intel Atom processor.

There’s still no word on a US release date for the Aspire 1825PTZ.

Update: Johannes from Netbook News.de has posted an unboxing and hands-on video. You can check it out after the break.