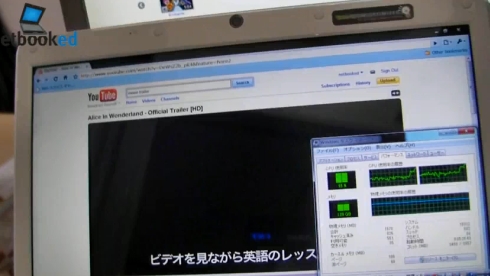 When I reviewed the Acer Aspire 1410 with a Core 2 Solo SU3500 processor and Windows Vista a last month, I found that it was much faster than your average netbook when it came CPU-intensive tasks like transcoding audio and video files. But there was one thing it still couldn’t do: play HD and high quality Flash videos on its high resolution 1366 x 768 pixel display.

But this week Acer released an updated version of the Aspire 1410. The new model has a 1.2GHz Intel Celeron SU2300 dual core processor and runs Windows 7 Home Premium. And according to Peter at Netbooked, it can handle HD YouTube videos reasonably well. But you don’t have to take his word for it. You can check it out for yourself by watching the… HD YouTube video below.

Playback isn’t 100% flawless, but the videos look very watchable. When you try watching similar videos with the older version of the Aspire 1410, it feels like you’re looking at a picture slideshow instead of a video. That’s no longer the case.

And that makes the new Acer Aspire 1410 the cheapest laptop I’m aware of with an 11.6 inch, 1366 x 768 pixel display, 4+ hour battery life, and HD Flash video capabilities. You can order one today from Amazon for just under $400

. Of course, the $400 HP Mini 311 will give the Aspire 1410 a run for its money once Flash Player 10.1 is released. That’s the upcoming version of Adobe’s Flash Player that will support NVIDIA ION GPU acceleration for Flash video, allowing you to watch 1080p Flash video on a netbook with a low power Intel Atom processor (provided it has NVIDIA graphics).

You can check out Peter’s video after the break: