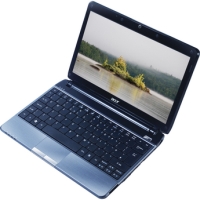 Update: Acer has released an updated version of this notebook with a dual core Celeron processor and Windows 7 Home Premium. You can read my review of that model here.

The Acer Aspire 1410 is a bit larger than your typical netbook thanks to its 11.6 inch, 1366 x 768 pixel display and nearly full sized keyboard. But with a growing number of netbook makers putting out 11.6 inch models, it’s not the screen that makes this laptop stand out. It’s the processor and chipset.

When the netbook revolution began in late 2007 and early 2008 netbooks were small, light, and cheap computers with a variety of Intel and VIA processors, running Windows or Linux. Over the past year so many Intel Atom powered mini-laptops have been released with Windows XP that it’s easy to forget that there are other options. The Acer Aspire 1410 is a good reminder. At around $450, it’s priced competitively with most netbooks, but it has a faster Intel Core 2 Solo processor, GMA 4500MHD graphics, and still weighs about 3.1 pounds, which makes it lighter than some Intel Atom powered netbooks.

The Acer Aspire 1410 measures 11.2″ x 8″ x 1.2″ at its thickest point. At the front, the laptop is just 0.9 inches thick with the lid closed. It weighs about 3.1 pounds. All of which is to say, it’s barely any bigger than your typical 10 inch netbook, and it’s actually lighter than some. 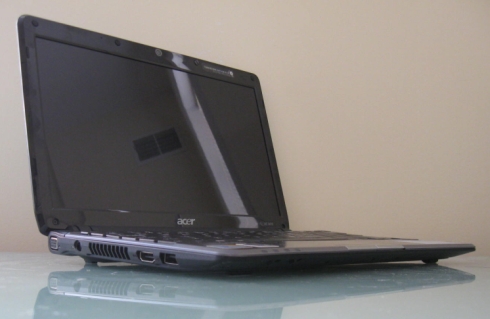 Around the sides of the computer you’ll find 3 USB ports, a flash card reader, Ethernet jack, VGA port, and an HDMI output.

There are also headphone and mic ports, and it’s worth pointing out that the mic jack actually has a metal rim, which should make it a bit sturdier than the cheap plastic jacks found on most computers. Of course, you’re more likely to use the headphone jack on a regular basis, and that’s made of plastic.

The lid has a glossy black finish which will show fingerprints, but it’s not the worst offender I’ve seen. 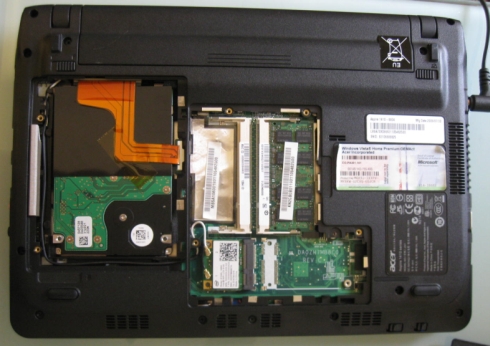 On the bottom of the unit you’ll find two panels that can be removed to upgrade the hard drive, RAM, or WiFi module. There are two RAM slots, which means you can upgrade the laptop to 4GB by picking up a 2GB stick. The model reviewed here came with a single 2GB stick occupying one of the slots.

The keyboard is pretty much a full sized keyboard. The keys are nice and large with a little space between them, and the keyboard stretches almost from one end of the chassis to the other. 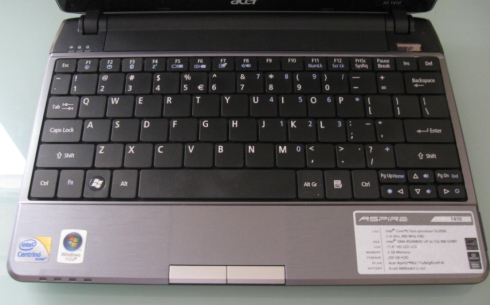 My one and only complaint about the arrow and Page Up and Down keys are crammed into a fairly tiny space in the bottom right corner. The more you use the keyboard, the more you get used to this configuration, which is similar to the layout on Samsung netbooks. But I often have a hard time hitting the Page Up and Down keys in a hurry. The arrow keys, which also double as volume and screen brightness keys, are a bit easier to use.

I took a 2 minute typing test at TypingTest.com to see how this keyboard stacks up against others I’ve used, and I was able to type about 95 words per minute with 98% accuracy. That definitely makes this one of the better keyboards I’ve used, although I find that keyboard layout can be a matter of taste. You may find other keyboards more comfortable depending on what you are used to. For instance, the keys on the Acer Aspire 1410 are all flat, and you may be more comfortable with concave keys. 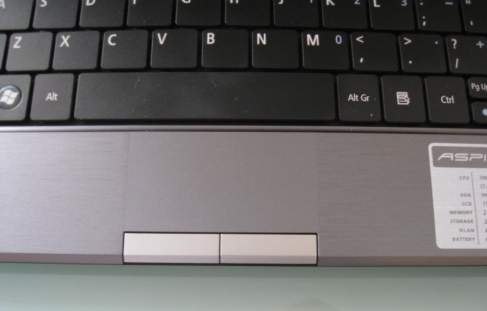 The touchpad is nothing too special, but it gets the job done. The palm rest area of the laptop features a brushed metal finish, while the touchpad is smooth. From a distance, it’s hard to see where the palm wrest ends and the touchpad begins, but you can feel it ever so slightly when your finger moves from one area to the other. The touchpad has a scroll area on the right side. You can also use multitouch gestures such as placing two fingers on the touchpad to scroll or pinching to zoom in some applications.

There are two distinct buttons below the touchpad for right and left clicks, and they work quite well.

Aside from the processor and graphics performance, the thing that sets this laptop apart from your typical netbook is the 11.6 inch, 1366  x 768 pixel display. And overall, it’s just about the perfect size and resolution for an ultraportable.

I’ve used several 10 inch or smaller netbooks with 1280 x 720 or 1366 x 768 pixel displays, and I’ve invariably gotten a headache after staring at the screen too long. To be fair, the problem is with the operating system and software, not the screen itself. But when using Windows Vista XP on a 10 inch netbook, the text tends to be super-sharp and difficult to read from a comfortable distance. 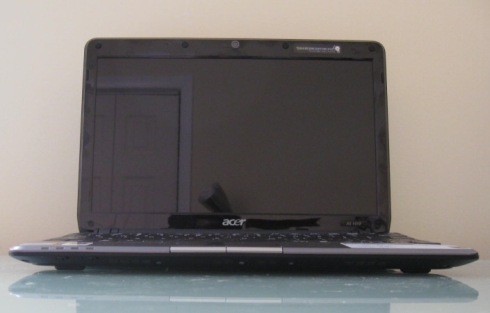 The 11.6 inch, 1366 x 768 pixel display, on the other hand, was sharp, but not too sharp. Text and pictures were crisp and clear, and video looked great, but we’ll get into that more in the performance section.

The screen is glossy, which means that it turns into a bit of mirror in brightly lit settings, especially if the display is turned off.

The Acer Aspire 1410 packs a 1.4GHz Intel Core 2 Solo SU3500 processor  and GMA 4500MHD graphics. And while the clock speed of a 1.6GHz Intel Atom N270 processor may be higher, the SU3500 CPU is significantly faster for most tasks. And the integrated graphics can handle tasks that would make a typical netbook choke.

In terms of everyday use, the laptop just feels more responsive than a typical netbook when it comes to running multiple applications simultaneously or opening up a web browser with a dozen or more tabs and flipping between them — something that’s made easier to do by the computer’s high resolution display. 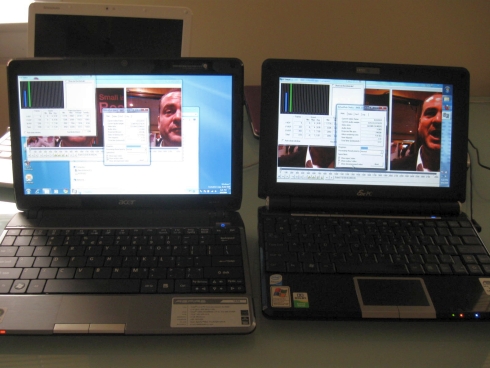 But there is one thing that’s very netbook-like about this computer’s performance: Flash video. The netbook currently ships with Windows Vista Home Premium, and when I installed the Adobe Flash Player and tried watching high quality video from sites including YouTube and Hulu, the laptop had trouble whenever I blew the video up to full screen mode. If you’re content with watching your video in a small window, you’ll be all set. But while it’s much faster than an Intel Atom CPU, the SU3500 isn’t exactly a bleeding edge processor. And it’s not powerful enough to pump out high quality Flash video smoothly on a high definition display.

I was able to improve Flash performance by installing Windows 7 and using Google Chrome as my web browser. But even under these conditions, some Flash video playback was choppy.

Now, there are three solutions for this. One, you can wait for Adobe to release an updated version of Flash that is either less resource heavy or which uses GPU acceleration, which could happen sometime in 2010. Or you could hold out for a low voltage processor that performs better. Or you can lower your expectations for Flash and just move on. 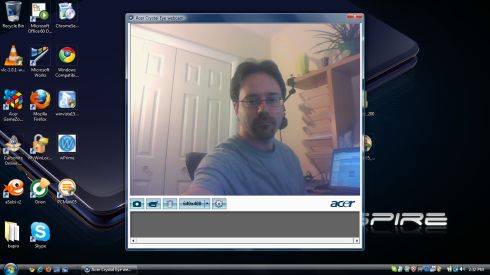 The VGA webcam has pretty sharp picture quality and worked great for a test call I made using Skype. But for some reason the image had a cloudy/milky look whether I was using Skype or the included Acer webcam utility. Update: It turns out there was a tiny piece of plastic covering the webcam that I didn’t notice. When you remove it, the image quality is excellent.

The Acer Aspire One fan does get audible, especially when the CPU usage is high. And the bottom of the laptop gets a little warm during extended use. But it’s not the loudest or hottest computer I’ve handled, and it certainly doesn’t get uncomfortably hot.

The speakers are reasonably loud for an ultraportable, but if you plan to blast tunes from this laptop you might want to invest in some headphones or external speakers.

The laptop ships with Windows Vista Home Premium, which runs reasonably well on the hardware. But one of the first things I did upon receiving the laptop was to install Windows 7 to see if I could get Flash video content to play more smoothly. And once Windows 7 was installed, I found myself rarely visiting the Windows Vista partition because Windows 7 just seemed generally more responsive. It’s hard to say how much of this was due to the updated operating system and how much was due to the bloatware that ships with Windows Vista.

So while I didn’t test most of these applications extensively, here’s a partial list of the software that comes preinstalled:

The US version of this laptop has a 6 cell, 4400mAh battery. Acer calls it a 6 hour battery, but I wasn’t able to get it to run for longer than 5 hours. That’s more run time than you’ll get from most Intel Atom powered netbooks with 3 cell batteries, but some netbooks with 6 cell batteries can run for twice as long.

It’s also worth noting that I got significantly better battery performance in Windows Vista than Windows 7. It’s not clear if this is due to differences in the operating systems or if Acer has loaded some battery utilities for Windows Vista that I didn’t notice. I did a clean install of Windows 7, so no Acer software was loaded in that environment. 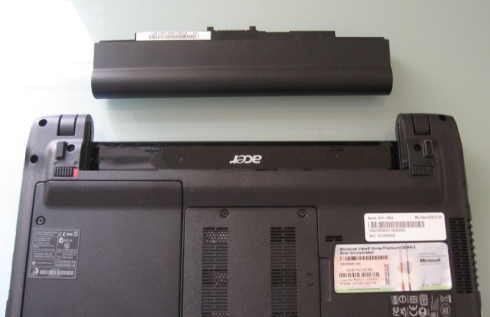 I performed two tests using each operating system. First, I tried a real-world test where I used the computer until it ran out of juice and shut down. And then I ran the Battery Eater Pro test which taxes the CPU continuously until the battery dies. Here are the results:

I’m hopeful that if and when Acer releases a Windows 7 version of this laptop the company will optimize the software to improve battery life under the operating system.

The Acer Aspire 1410 strikes an excellent balance between power, performance, price, and battery life. It can’t do everything a more powerful laptop can. But at $449, this laptop is priced competitively with a netbook, and it can certainly handle a number of tasks that are beyond the reach of a typical netbook like playing 1080p video or some modern video games. 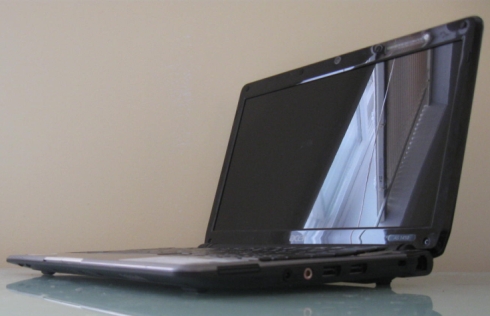 The battery life could be better, and some netbook fans may decide that an 11.6 inch laptop is just too large to be truly portable. But during the two weeks that I’ve been testing the Aspire 1410, I’ve come to rely on it as a workhorse laptop that can handle almost any task I can throw at it. the Aspire 1410 has become the first laptop I grab whether I’m about to run out of the house, or just to the living room for some light web surfing.

Asus, Samsung, Dell, and a number of other companies plan to launch or have already released laptops that are similarly sized and which use similar Intel Consumer Ultra Low Voltage (CULV) processors. And while I don’t see them completely replacing 10 inch netbooks that can run for 10 hours or more and fit into a small handbag, I do think that the Acer Aspire 1410 shows that there is a niche between netbooks and full sized, full priced laptops. And I’m excited to see this niche start to flesh out.