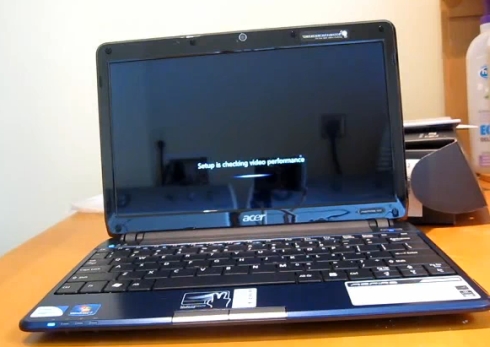 I’ve just starting testing the computer’s performance, but it seems a tiny bit zippier than the Core 2 Solo version, which is impressive for two reasons. First, the single core version is already much snappier than most Intel Atom powered netbooks that are similarly priced and only a little bit smaller. And second, the new model actually costs a little less than the earlier version.

The first thing I wanted to see is how the laptop handles HD Flash video. Netbooked reported it works reasonably well, but my results were a little more mixed.

While Adobe has promised to bring GPU acceleration features to Flash Player 10.1 soon, as far as I can tell Adobe will be supporting NVIDIA, ATI, and other graphics processors but not Intel’s integrated graphics solutions. The Core 2 Solo version of this laptop played 1080p video from the hard drive without any problems, but struggled with HD Flash video. The dual core version appears to work much better with high quality Flash video — but it’s still not quite perfect.

I was able to play an HD video from YouTube in full screen without any hiccups. But standard definition video from Hulu is hit or miss. Some TV shows I looked at played smoothly in full screen, while others were a bit choppy. It wasn’t quite like watching a slideshow, but there was just enough lag when watching the sneak preview of ABC’s V to be annoying. HD video from Hulu was even worse, and did actually look more like a slideshow at some points than a video. It appears that Hulu handles Flash differently than YouTube and some other sites. For one thing, I know that Hulu doesn’t allow you to buffer more than a few minutes worth of a video, which makes it harder for users to download videos from the site.

I’ll be interested in seeing how the computer handles other tasks I can throw at it. But if HD Flash playback is high on your priority list, you might want to consider looking at an NVIDIA ION powered laptop like the HP Mini 311 which will eventually work with Flash Player 10.1, or a machine with a more powerful processor such as the Acer Aspire Timeline 1810T.

You can check out my unboxing video of the new Acer Aspire 1410 after the break.