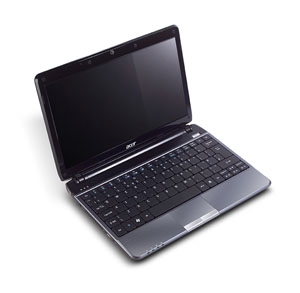 Update: Now you can read my detailed review of the Acer Aspire 1410.

The Acer Aspire Timeline series of thin and light computers aren’t exactly netbooks. They have Intel CULV processors that use more energy and provide better performance than most Intel Atom based netbooks. But it’s never been the processor that defined the netbook, it’s the size and price. And most of the Timeline notebooks are 13 inches or larger. But there is one model I’ve been keeping my eye on: The Acer Aspire Timeline 1810T, which is expected to have an 11.6 inch display and a 1.4GHz Intel ULV SU3500 processor and GMA 4500MHD graphics.

Now it looks like Acer may be rebranding that model so that it’s not part of the Timeline series or the Acer Aspire One netbook series. Acer’s German site simply lists a model called the Acer Aspire 1410, which certainly looks a lot like the 1810T. And Netbook Choice spotted two US retailers taking pre-orders for the Aspire 1410 for between $465 and $475.

The laptop has also been spotted in the wild in China.

So let’s see. Is it priced under $500? Check. Does it weigh less than 3 pounds? Just barely. Sure, it’s got a screen larger than 10 inches, but there are plenty of so-called netbooks with 11.6 inch and 12 inch displays these days. And I’m guessing the Aspire 1410 will perform circles around them when it comes to graphics and CPU-intensive tasks. The only question I have left is what kind of battery life you’ll be able to squeeze out of the 6 ell, 4400mAh, 47.5WHr battery.

Oh, and if that wasn’t enough for you, it looks like there’s also going to be an Acer Aspire 1810TZ model, sporting a dual-core CULV processor.