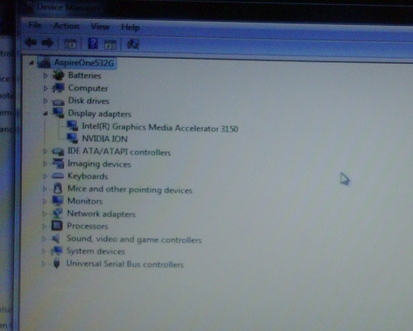 It looks like Acer is getting ready to break the mold with its upcoming Acer Aspire One 532G netbook. Sure, it will look virtually identical to the standard Aspire One 532H which is already available. But the 532G will be one of the first 10 inch netbooks with NVIDIA ION graphics. Oh yeah, and we’re talking NVIDIA ION 2 here.

As far as I know, NVIDIA still hasn’t officially introduced the ION 2 platform, but with Acer putting out its press release for the Aspire One 532G, it seems likely that NVIDIA will make an announcement soon.

The Acer press release doesn’t specifically refer to the chipset as ION 2, but it does mention a “next-generation NVIDIA ION GPU with dedicated 512MB memory. NVIDIA’s current ION technology uses an Intel Atom processor and replaces Intel’s integrated graphics with an NVIDIA solution. That’s not possible on computers with Intel Atom Pine Trail chips like the Aspire One 532G, because the graphics and processor are on the same piece of silicone. Instead, ION 2 will pair the Atom N450 chip with a switchable graphics card that will let you watch 1080p HD video on the netbook.

There aren’t a lot of additional details about the Aspire One 532G, but I’m pretty sure it will have a 10.1 inch, 1366 x 768 HD display, since the press release mentions playback of 720p video on the display and 1080p through an HDMI output. Update: Blogeee reports the notebook will have a 1024 x 600 pixel display. But that’s based on a tip from a “source,” so let’s take it with a grain of salt for now.

Sascha from Netbook News.de apparently got his hands on a demo model briefly this morning, and he posted an image of the device manager to TwitPic. And Notebook Italia has a hands-on video of the laptop playing HD video. You can check it out after the break.