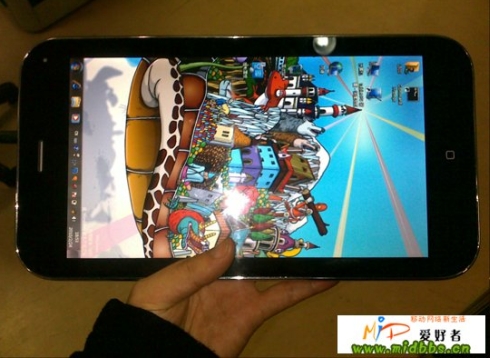 The Apple iPad is expected to begin shipping in the next month or two, and while it remains to be seen whether it will truly revolutionize the slate PC space, there’s one thing the iPad has already done: spark a ton of competition in the tablet space. For much of 2010, the iPad was nothing but a rumor, but PC makers were bending over backward trying to create products that would compete with the as-yet-unannounced tablet.

Shenzhen, China-based manufacturer TESO’s new tablet looks pretty much exactly like an iPod Touch or iPhone — if those devices had 10 inch displays and ran Windows 7 instead of the iPhone OS.

On the inside, the tablet is pretty much a standard netbook with a few extra features thrown in for good measure. It has a 1.66GHz Intel Atom N450 processor, 1GB of RAM, and hard drive instead of the iPad’s solid state storage. The tablet also has a 10.1 inch, 1024 x 600 pixel touchscreen display, a 3G modem, and GPS. It has a 3000mAh battery

via Cloned in China and M.I.C. Gadgets