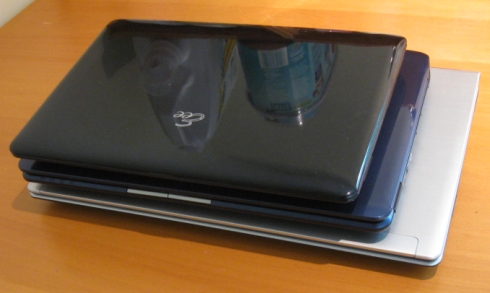 Over the past few months, the low cost ultraportable notebook space has expanded to include a new class of device. While 10 inch and smaller netbooks are still playing an important role in the field, there’s been a new crop of devices with 11 to 12 inch displays selling for $600 or less. While these laptops including the Acer Aspire 1810T, Dell Inspiron 11z, and Asus UL20A are larger and generally more powerful than most netbooks, as well as more expensive, they’re still a lot cheaper than the ultraportables of yesteryear. And they tend to weigh less than 4 pounds, which is always a good thing.

But just to show you why I don’t expect to make a habit of covering 13 inch or larger laptops anytime soon, I’ve put together a little photo shoot that shows the difference between three laptops I happen to have at Liliputing HQ this week (yes, the photo shoot took place in our laundry room… you have a problem with that?): The 10 inch Asus Eee PC 1008HA, the 11.6 inch Acer Aspire 1410, and the 13.3 inch Asus UL30A.

While the Acer Aspire 1410 is just a little bit larger than the Asus Eee PC 1008HA, the Asus UL30A is clearly in a completely different class. Sure, it weighs just 3.9 pounds, but it’s a heck of a lot bigger and bulkier. And while that makes it a better choice for anyone looking for a larger machine that won’t cause eye strain, it’s not quite as portable as the other two laptops.

You can check out more photos of the three laptops after the break. While I think it should be pretty clear which computer is which, for the sake of reference, the Asus Eee PC 1008HA is black, the Acer Aspire 1410 has a blue lid, and the Asus UL30A has a silver/gray lid.

6 replies on “A tale of three notebook sizes”