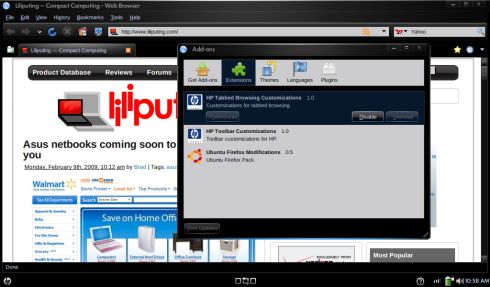 I’ve spent a fair bit of time over the last few days waxing poetic about how I think the HP Mini 1000 Mi Edition has one of the best thought out Linux user interfaces I’ve ever seen. But that’s not to say there aren’t some problems. First and foremost, my Mini 1000 crashed on Friday. Big time. Like I was using it, put it to sleep, and when I tried to wake it up, I was greeted with a black screen and a blinking cursor. At first I couldn’t even reinstall the operating system from scratch, and ultimately had to reinstall Windows first, (to reformat the hard drive) and then reload the Mi Edition software.

It’s very possible that this crash had something to do with the fact that my HP Mini 1000 originally shipped with Windows, not Linux. So I’m not sure that this is a problem that users who purchase a Mi Edition netbook directly from HP will experience. But I know I’m not the only one who’s had this problem after installing Mi Edition using a disc image and USB stick. I’ll let you know if I have another catastrophic crash in the future.

Update: The crash was caused by a BIOS issue. I haven’t had any problems since upgrading to the most recent BIOS version, which is the version that HP is shipping all computer preloaded with the Mi Edition Software with.

But there are a few other minor annoyances too:

But one of my biggest complaints is this: HP added some customizations to Firefox that make absolutely no sense. On the one hand, there’s an icon you can hit to make the browser full screen (as if you had pressed F11), which is nice. But for some reason there’s also a tabbed browsing customization that means you will always see the tabs. Normally if you have just one window open in Firefox, there’s no tab bar. When you open a second window, the tab bar appears.

And that’s fine if you have a 1280 x 1024 pixel display. Or even 1024 x 768. But the HP Mini 1000 has a 1024 x 600 pixel display and the models that ship with Mi Edition software have an even lower resolution 1024 x 576 display. So why would you add a customization to the web browser that takes away some of that space. Fortunately you can disable this customization from the Firefox add-ons window. But I have no idea what the toolbar  customization is doing there in the first place.