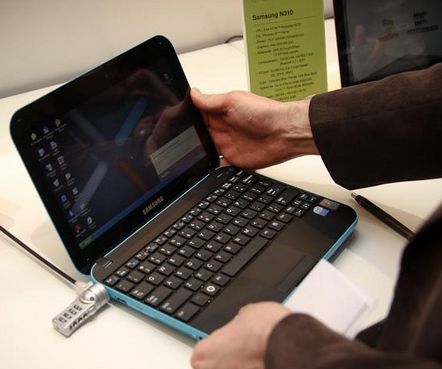 This week Samsung launched several new netbooks, including the upcoming Samsung N310 which has the usual netbook specs but doesn’t look like any other mini-laptop I’ve seen to date. It has a screen that reminds me of the HP Mini or Dell Inspiron Mini 10 netbooks because it’s a single sheet of glass that stretches from edge to edge (although the display area is actually a bit smaller). And the keyboard looks a lot like the “chiclet”-style keyboard found on newer Asus Eee PC models. But the Samsung N310 also has a colorful rubberized casing that gives it a distinctive look.

The folks at Pocket Lint got a chance to take a closer look at the new Samsung netbook and they’ve posted a series of photos. It’s worth noting that the rubberized chassis isn’t ruggedized. The material probably won’t reflect fingerprints as much as some netbooks with glossy lids. But that rubber case isn’t going to protect the hard drive or screen from a fall any better than a typical plastic or metal laptop case.

The Samsung logo embossed across the back of the lid also seems a bit large and obnoxious. But the screen and keyboard do look quite nice.

The Samsung N310 should hit the streets in May. It looks like it will run about £399 in the UK and €499 elsewhere in Europe. No word on the US pricing yet.