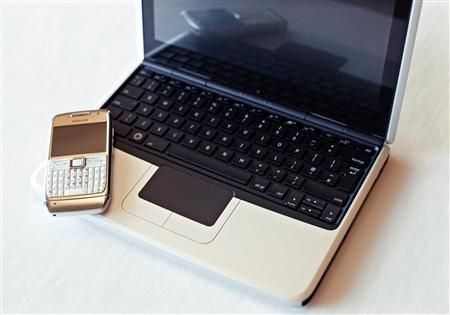 If those images of the upcoming Nokia Booklet 3G released this morning looked a little shiny and photoshopped, Reuters has proof that the device is real. A Reuters photographer has snapped a few photos of the netbook in real world settings, including the one shown above.

There’s still a lot we don’t know about the laptop. For instance, it’s described as having an Intel Atom processor, but it’s not clear if we’re talking about a low power Intel Atom Z520 CPU, a more common Atom N270, or an upcoming Atom Pine Trail processor. The fact that the netbook has an HDMI output sort of rules out the Atom N270 unless there’s also a dedicated graphics processor. But we won’t know all the details until the Nokia World event on September 2nd.

Update: A Nokia spokesperson confirmed to All About Symbian that the Booklet 3G will have a 1.6GHz Intel Atom Z530 processor.