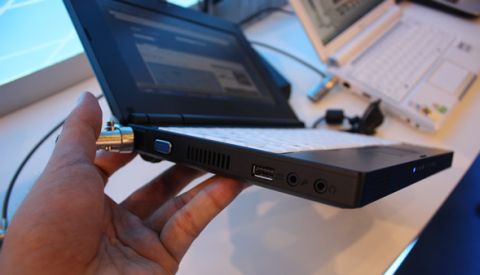 When the first pictures of the NEC LaVie Light netbook hit the web last week, I wasn’t impressed. The computer looks boxy and appears to have an enormous bezel around the screen. The folks at Engadget Chinese have had a chance to check one out in person, and they say it’s not quite as bad as the promotional images make it look. I remain skeptical, but I find pictures don’t always do these tiny laptops justice. Sometimes you’ve got to see one up close or hold it in your own hands.

Under the hood, the NEC LaVie Light seems to be as capable as any other netbook. It’s got an 8.9 inch display, a 160GB HDD, 1GB of RAM, and a 1.6GHz Intel Atom CPU. It weighs just 2.6 pounds. And it turns out the screen can be pushed back to a 180 degree angle, which makes it a bit more flexible than most other netbooks. I can’t think of too many reasons you’d want the screen to rotate to a 180 degree angle unless you happen to enjoy placing a computer on the floor and typing with your toes. But in a market flooded with netbooks that have nearly identical specs, it’s nice to see NEC offer something distinctive.

3 replies on “A closer look at the NEC LaVie Light”