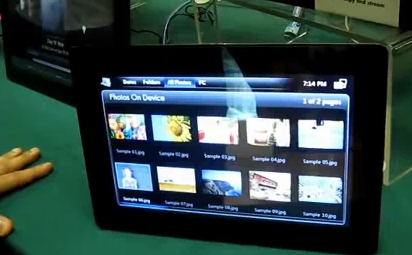 When HP launched the DreamScreen internet connected display yesterday morning a lot of people commented on how much it looks like the mythical tablet. But it’s not. It’s something else entirely. What HP has done isn’t to reinvent the tablet, instead the company reinvented the digital photo frame and added a whole lot of features to it. The idea is that HP sees the future of media not necessarily as a TV or PC only experience, but as a series of screens you could have throughout the house, each playing different roles. The DreamScreen is a 10 or 13 inch screen that can hang out on your nightstand or in your kitchen.

The DreamScreen is powered by an ARM-based processor and it runs HP’s custom software on top of an embedded Linux kernel. The user interface is a lot like HP’s TouchSmart or MediaSmart software, and it should look kind of familiar to anyone who has used the HP Mini Mi Edition Linux software.

The device can function as a clock or calendar, digital photo frame, media player, or client for web apps including Facebook, Pandora, and Snapfish. It also has a library of 15,000 internet radio stations that you can stream music from. While there are WiFi enabled digital photo frames from other companies, I haven’t seen any others that have this many features. The DreamScreen has 2GB of built in storage, with about 1.5GB available to end users. There’s also a USB port and multi-format Flash card reader for adding extra content. Or you can stream photos, videos, or audio from a Windows XP, Vista, or 7 machine on your home network.

The DreamScreen can handle MP3, AAC, WMA, and WAV audio and MPEG-1/2/4 and H.264 video files. One of the things I was most curious about is how easy it will be to update the software ore add new features. Apparently HP can push out software updated over the air. And while the user interface isn’t that customizable right now, if the DreamScreen takes off, it could become a platform for developers and users would be able to pick and choose the applications they want to have installed.

I shot a brief interview and walkthrough of the DreamScreen interface at an event in New York last night. You can check it out after the break.

4 replies on “A closer look at the HP DreamScreen – Video”