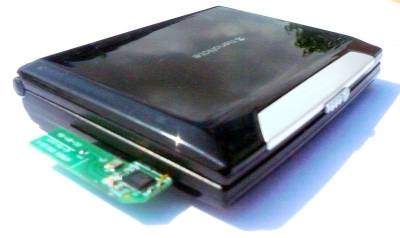 Rememebr the NanoNote? I wouldn’t blame you if you didn’t, but this little pocketable computer features a 3 inch screen, a QWERTY keyboard, and a 336 MHz Xburst Jz4720 processor. It features open source Linux software and open hardware platform as well. One thing it didn’t have until this week? Wireless capability.

But now the folks at TuxBrain have found a way to add atusb wireless to a NanoNote. You can send and receive wireless communications between computers using the IEEE 802.15.4 platform over the 2.4 GHz band. In other words, it’s similar to WiFi or Bluetooth, but it doesn’t work with either of those standards.

TuxBrain says you can expect 250kbps data rates between two devices placed about 10 meters (33 feet) apart), or up to 2 Mbps under much shorter ranges.

You may have noticed that the NanoNote is pretty lousy by today’s mobile device standards and the folks at TuxBrain seem to be getting awfully excited about a pretty slow wireless data connection. What sets this apart from traditional WiFi and Bluetooth technology though is that it’s an entirely free and open source platform.

The wireless adapters start at about $42, or 29,50 Euros. You’ll need a second adapter for a second computer if you want to give your NanoNote something to talk to though. It won’t work with a typical WiFi router.