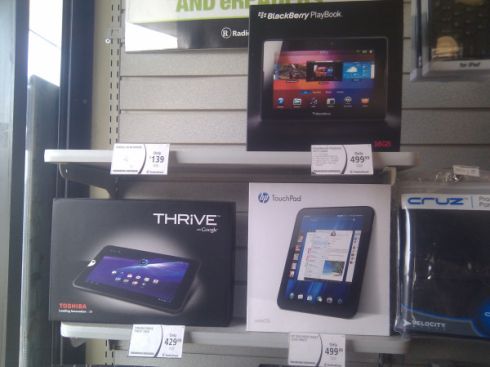 Last night HP marked down the price of an HP TouchPad tablet to $99 for the 16GB model and $149 for the 32GB model. In Canada, Best Buy, FutureShop, and The Source all followed suit and many bricks and mortar stores sold out nearly instantly. It turns out in the US it’s even tougher to find a cheap HP TouchPad this morning.

If you placed an order from Amazon, Target, or HP.com in the middle of the night, you might have managed to snag a $99 TouchPad. OfficeDepot.com and Walmart.com were also offering the tablets for $149 or less, but quickly sold out.

So I woke up early this morning to see if I could find any bargains at the Staples, Best Buy, Radio Shack, Target, or Walmart stores closest to where I live. The short answer is no.

Staples and Best Buy in the US are both in the process of returning all unsold inventory to HP. That means you can no longer by the TouchPad at those stores for full price, let alone for $99.

Walmart had a few units this morning for full price, but inventory is limited. I’ve heard that some folks who placed orders on the web and arranged for in-store pickup managed to get their tablets for $99, but your results may vary. By the time I tried this, in-store pickup at my nearest Walmart location wasn’t an option.

Target didn’t have any units in the store when I went, and the TouchPad is listed as out of stock on the Target website.

I did manage to find one store with HP TouchPad units in stock: Radio Shack. Unfortunately they were selling for full price. The manager told me to come back if I heard that they were being marked down, because she expected to still have some in stock – but I don’t think she realized what a rush the new $99 price has caused. If Radio Shack does drop the price instead of sending back units to HP, I suspect they won’t be on the shelves for long.

I ran across a number of other people hunting for TouchPads this morning while waiting for Staples and Best Buy to open. If HP had priced the tablet at $99 from the get-go, the company probably wouldn’t have had any trouble selling this tablet. Of course, HP also probably would have lost money on each tablet sold. I’m pretty sure they cost considerably more than $99 to manufacture.

The good news is that with Best Buy and other retailers sending inventory back to HP, we may see more $99 and $149 TouchPads in stock at HP.com soon.

Best Buy reversed its decision on 8/21 and promptly sold out. Staples is also offering discounted TouchPads… but good luck finding one.

On Monday, 8/22 Barnes & Noble had the TouchPad in stock for about $102 for a few hours, but that deal seems to be gone now too.

It looks like your best bet for getting a cheap TouchPad at this point is either to sign up at HP.com to receive a notification when they’re back in stock or head to eBay where people that picked up $99 TouchPads will probably be selling them for closer to $200 — which is still a pretty good deal.