That makes the little guy significantly faster than the popular MK802 and a range of other mini PCs, most of which have single core ARM Cortex-A8 or Cortex-A9 chips.

But at $90, the new model isn’t much more expensive than those little devices. 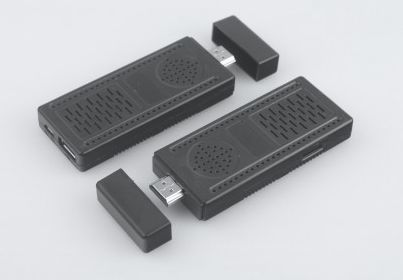 The little computer comes with 4GB of flash storage and features 802.11n WiFi, a USB 2.0 port, an HDMI port, and a microSD card slot. It runs Google Android 4.0 Ice Cream Sandwich and comes with the Google Play Store preloaded.

All you need to do is plug in a TV or monitor and a mouse and/or keyboard to use this little USB thumb-drive sized device to bring Android apps to your big screen TV.

The device features ARM Mali 400 graphics and supports 1080p HD video playback. It can also run Adobe Flash Player 11 — although that’s not as useful as it once was, since Adobe is pretty much pulling out of the Android space.

If the Oval Elephant mini PC looks familiar, that’s because it appears to be the same device South African distributor Reno Botes told us about last week.

Update: Botes has received his first shipment, and he’s sent us some photos giving us a better look at the RK3066 mini PC.

As far as I can tell, Oval Elephant is the first company selling the device directly to consumers in the US. It’s expected to start shipping September 7th.

While the mini PC ships with Android 4.0, it may be possible to run other Linux-based operating systems designed to run on computers with ARM-based processors. But the Rockchip RK3066 is a newer processor that doesn’t have as much support from independent developers as the Allwinner A10 CPU found in the MK802, Mele A1000, and many other Android 4.0 Mini PCs which are already able to run Ubuntu and other Linux distributions.