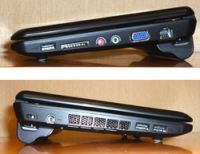 Laptop tests batteries by running a script that emulates typical computer usage, so I tend to believe their battery life estimates.

The downside of this particular battery is that it’s enormous compared to the 3 or 6 cell batteries that MSI ships with its Wind netbooks. It’s also heavier. The MSI Wind with a 9 cell battery weighs 3.2 pounds. With a 6 cell battery the weight drops down to 2.6 pounds, while the 3 cell version weighs just 2.3 pounds.

On the other hand, the Asus Eee PC 1000H weighs 3.2 pounds with a 6 cell battery. So if you can deal with the way this battery adds some bulk to the bottom of your netbook, you can have a netbook with 7.5 hours of battery life that weighs the same amount as a netbook that only gets 4.5 to 5 hours of juice. And as Kevin Tofel and I discovered, it’s hard to really discern the differnce between 2.6 and 3.2 pounds. They’re both pretty darn light when compared with a typical 5 or 6 pound laptop.

There’s another downside to this particular battery though. Laptop Magazine reports that it will sell for a whopping $180, which is kind of ridiculous, when you can pick up an MSI Wind netbook for as low as $350.