One of the key selling points for Linux is that it can breathe new life into old computers since the hardware requirements for a modern Linux distribution are typically much lower than those for the latest versions of Windows or OS X.

But have you ever wondered just how low you can go? 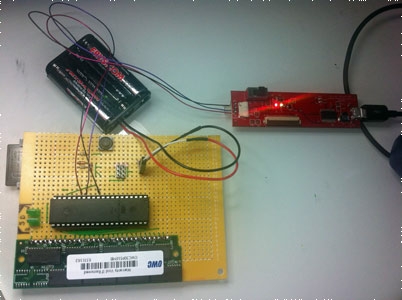 Dmitry Grinberg decided to see if he could build a simple Linux computer around an 8-bit microcontroller. Just to be clear — this is not what the ATmega1284P microcrontoller was designed for.

It has just 128KB of storage and 16KB of RAM. It runs at up to 20 MHz, and is designed for embedded applications such as remote controls, appliances, or power tools… not computers.

Most full-blown Linux operating systems, on the other hand, need a 32-bit processor and significantly more memory and storage. So Grinberg figured out how to attach a 1 GB SD card, and a small amount of SDRAM. Then he wrote an ARM processor emulator so he could run an ARM-compatible version of Ubuntu Linux.

Here’s the crazy thing: It all works. But there’s a catch. It works very, very slowly.

The emulated CPU runs at just 6.5 KHz, and it takes two hours just to boot to a bash prompt… and another 4 hours to load a full Ubuntu desktop.

In other words, you’re not really going to want to use this system for much of anything. But as a proof of concept, it’s pretty amazing.

Also amazing? You can watch a 3.5 hour video showing the system in action… if you’re really bored. If you don’t have as much time, there’s an 11 minute time-lapse video showing some of the highlights.