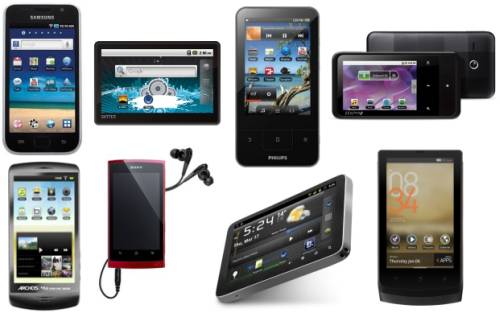 The iPod touch is a pretty amazing little device that bridges the gap between a portable media player and a smartphone. It’s a handheld device that you can use to surf the internet, listen to music, watch movies, play games, or download hundreds of thousands of applications. With a starting price of $199, it’s cheaper than a smartphone — and there’s no monthly voice or data plan to pay for.

It’s taken a while for other companies to start competing with the iPod touch. A year or two ago there was really nothing else like it on the market. Today there are a number of alternatives.

The iPod touch still offers more bang for your buck than most competitors, but if you’re looking for something a little cheaper, a device with a larger display, HDMI output, or just a different operating system there are now a number of Android alternatives to the iPod touch.

Here are a few:

Update: This article was originally published in 2011. You can check out our more up-to-date look at Android alternatives to the iPod touch for a look at the landscape as of late 2013.

Or you can continue reading… some of the items listed below are still available.

The Samsung Galaxy Player WiFi 5.0 is probably the closest thing you’re going to find to a true Android version of an iPod touch. In many ways, this portable gadget with a 5 inch display is just a Samsung Galaxy S smartphone with the cellular radio ripped out.

It’s screen isn’t as sturdy as the Gorilla Glass display on the phone, but the Samsung Galaxy WiFi 5.0 supports a wide range of audio and video formats, runs Google Android 2.3.5 Gingerbread, and has GPS capabilities.

Samsung also makes a 4 inch model of the Galaxy Player WiFi, which is available from Amazon for $230

Archos actually makes a whole range of portable media players powered by Google Android. I could just have easily selected the Archos 28 or Archos 32 for this article, but the Archos 43 has a higher quality display than it siblings. It also has a speaker and microphone as well as akick-stand.

I’ll be honest — the Skytex Primer Pocket isn’t very good at anything except playing audio or video content. It’s slow and has an unusual processor so that many apps don’t run and those that do often don’t run very well. But it does run Android. It can surf the web (slowly). And it’s dirt cheap, which almost makes it worth checking out.

Next to the Samsung Galaxy Player, the Sony Walkman Z is probably the highest quality Android portable media player around. Like Samsung’s device, the Walkman Z comes from a company with a long history of making both smartphones and audio/video devices. There’s just one catch – the Sony Walkman Z isn’t yet available in the US. It was recently introduced in Japan, where it’s expected to go on sale in December.

The latest Philips GoGear Connect portable media player is smaller than the iPod touch, and a tad cheaper. It also has an FM radio.

The Latte Communications ICE Smart has a 5 inch display, supports 1080p HD video playback, and has a reasonable low price tag. Unfortunately it also has a relatively slow processor.

The Cowon D3 is available with up to 32GB of storage — which is more than you get from most of the other devices on this list. Unfortunately while 8GB and 16GB models are also supposed to be available, I can only find product listings for the 32GB model which runs $280 — which means the Cowon D3 is also one of the most expensive products on this list.

Creative’s Android-powered media player isn’t the prettiest or fullest-featured alternative to the iPod touch. But with prices starting at just around $140, the Creative Zen Touch 2 can handle basic media tasks while also running many Android apps.

The App Store for iOS currently has more third party apps than the Google Android Market — which means there are more apps available for the iPod touch than for any of these tablets. On the other hand, you have to jailbreak an iPod touch to run apps which aren’t available from the App Store, whereas most Android devices can easily run side-loaded apps.

While most of the devices listed above ship without full access to the Android Market, you can install a hacked version on some devices, or use a third party app store from Amazon, SlideMe, or another company if you’re not happy with the solutions offered by the device manufacturer.

Since Apple chose not to update the iPod touch with a faster processor or better screen this year, there’s a chance for Android device makers to catch up to the iPod touch. But right now there are few Android devices that can match Apple’s iPod touch in terms of screen resolution, battery life, or other features.