The MK802 is a tiny computer that fits in the palm of your hands. It looks like a slightly bulky USB flash drive, but it actually has a processor, RAM, storage, and I/O ports, which make it a Mini PC.

There’s also a microSD card slot for extra storage, a mini HDMI port for connecting an external display, a full-sized USB port for a keyboard, mouse, or other accessory. The device also has a mini USB port which you can use to power the MK802, connect it to a computer, or plug in peripherals.

You can pick one up from AliExpress for just $74. The seller also has a model with 1GB of RAM for $84. I ordered one about three weeks ago, and after waiting most of a month for the package to arrive (free shipping is the only option), it arrived last night.

Update: While the MK802 is still one of the most popular Android mini PC sticks, it’s hardly alone. In the months following publication of this article, Chinese manufacturers have produced many other devices with more memory or storage, faster processors, or other improvements. 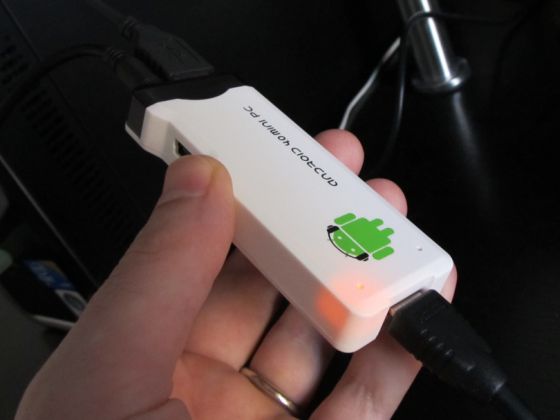 I knew the little computer was small, but when I opened the box I was surprised at just how light it was. A postage scale confirms that the MK802 weighs just 0.9 ounces. 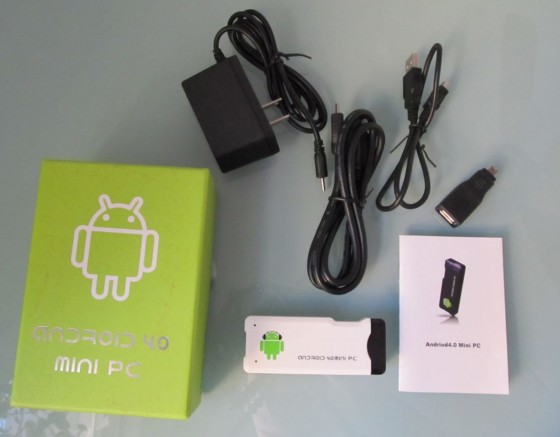 There’s no power switch on the MK802. You turn it on by plugging in either the power cord or by connecting the mini USB cable to a power source (such as a PC or a wall jack).

Unfortunately that means that you turn off the device by unplugging the power cable. I haven’t found a way to shut down the MK802 properly or enable any sort of sleep mode. I suspect there may be third party apps that will let you shut down the device without unplugging it though.

I plugged in a Logitech receiver for the wireless keyboard and mouse I typically use with my desktop PC and the Mini PC recognized them immediately. Since the keyboard and mouse share a receiver, I only had to use one USB port for both peripherals.

If you plug in a mouse, but no keyboard, the on-screen Android keyboard will be accessible. This lets you enter text without a physical keyboard — so you can connect the Mini PC to a television and use a wireless air mouse as a remote control.

Not only does the MK802 come with Google Android 4.0, it also comes with the Android Market preloaded. I don’t know if the Mini PC is actually a Google Certified device, but I’m not complaining.

After connecting to my WiFi network and downloading a few apps from the Market, Android automatically updated the app to the new Google Play Store.

The official Gmail, Google Maps, and YouTube apps also came pre-installed, as well as a few apps designed for the Chinese market including apps for online video sites including Youku.

The Allwinner A10 CPU is a processor that typically shows up in low-cost Android tablets such as the Coby Kyros MID9742.

Since the MK802 doesn’t have a display it can be much smaller than a tablet or even an Android smartphone — and much cheaper as well.

But since this is a budget CPU, it’s not exactly a speed demon. While you can surf the web, play games, and watch web video on the MK802, some tasks feel a little sluggish. Web browsing, for instance, is kind of slow.

The computer also gets rather warm to the touch after it’s been on for a few minutes. I’m a little worried that it could overheat if used for an extended period — but I haven’t used it long enough to know if that’s a real risk.

I wouldn’t recommend this as a primary computer for most folks. But if you’re looking for an Android box that will let you stream Netflix or YouTube on your TV, do some light web surfing, or play some games you could certainly do a lot worse.

It would be nice, though, if there was a way to put the MK802 into a sort of sleep mode when it’s not in use. Right now you have to wait for the entire operating system to boot before you can do anything.

The MK802 could also make a decent, inexpensive computer for someone who doesn’t need a very fast PC or the ability to run Windows apps.

Of course, if you really do need to run Windows apps… there’s a way to do that. The MK802 can run remote desktop software such as LogMeIn, Splashtop, TeamViewer, or PocketCloud to remote control a Windows PC. You can also use the OnLive app or similar software to stream console-quality video games to the MK802 over the internet.

I suspect the little computer may also be able to run other operating systems. There’s been some progress in porting Ubuntu Linux to run on devices with Allwinner A10 processors.

Update: Yup. You can run Ubuntu, Fedora, Puppy, and other Linux distributions on the MK802.

For those content with Android… but looking for a little more control over the operating system, you may be pleased to know that the Android 4.0 Mini PC appears to be pre-rooted. Titanium Backup and other apps that require root access run without any modifications to the computer.

I ordered my MK802 from AliExpress seller Rikomagic Store. But a number of other sellers are offering similar devices for similar prices.

You can also order a Zero Devices Z802 from AsiaPads for $76, or get a model with 1GB of RAM for $70 from OEM Systems Company through Amazon