A number of Chinese hardware makers are manufacturing tiny computers running Google Android 4.0. The PC-on-a-stick looks like a USB flash drive, but has a 1.5 GHz Allwinner A10 processor, and HDMI port for connecting a display and a USB port for connecting a mouse, keyboard, or other accessory. 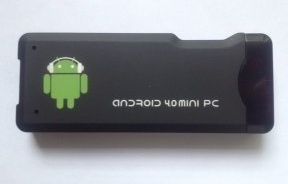 We’ve seen the little computer sold for about $74 as the MK802 and the Zero Devices Z802. On a trip to the Linaro Connect conference in Hong Kong this week, Charbax at ARMDevices caught up with another company offering a computer based on the same design.

This version is just called the Android 4.0 Mini PC, and you can pre-order one from Amazon for $70

There are two interesting things about this model. First, it has 1GB of RAM, while most of the other versions I’ve seen have 512MB. Second, Charbax got to see what the PC looks like if you take the case off.

If you just want to see the Mini PC topless, you can skip to about 5:30 in the video below.

Another thing the video confirmed for me is that while there’s a power jack on the Android 4.0 Mini PC, you can also power the device through the mini USB port.

The little computer measures about 3.5″ x 1.4″ x 0.5″ and weighs 7 ounces. It includes 802.11b/g/n WiFi and has some internal storage as well as support for a microSD card slot. Other models seem to have 4GB of flash storage, but I’m not sure how much this model has.

While the Android 4.0 Mini PC, MK802, or whatever you want to call it isn’t going to replace your Alienware gaming rig anytime soon, the little computer can handle many basic computing tasks such as web browsing, video playback, or even document editing or gaming with the right Android apps.

Out of the box it’s not going to run desktop PC apps such as Microsoft Office or Adobe Photoshop — but there are plenty of alternatives that run on Android. And I wouldn’t be surprised to see someone figure out how to get Ubuntu or another Linux-based operating system up and running on this little computer with an ARM Cortex-A8 processor.