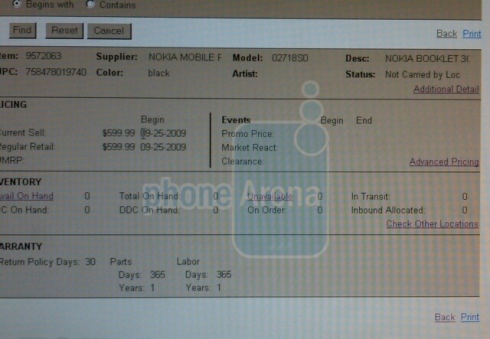 A lot of people have been making a lot of fuss over the supposed $800 price tag of the Nokia Booklet 3G. That’s the price Nokia originally said the unlocked version of the 3G-enabled netbook would sell for in the US. But that was then. Yesterday we learned that Best Buy would be the exclusive distributor of the Booklet 3G in the US. And today Phone Arena has received a document from a tipster showing a retail price of $599.99 for the mini-laptop.

It’s likely that you’ll be able to get the device for even cheaper if you sign up for a service contract with a wireless carrier, although no details about that have been released yet. I just find it hard to believe that Nokia would sell a 3G enabled netbook in the US if the company didn’t have a deal with a telecom in the works. Of course, you could just shell out $600 and use the laptop with your 3G wireless provider of choice, but you’ll still have to pay $40 to $60 a month for the privilege.