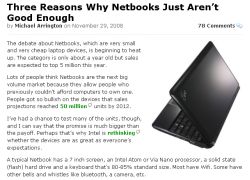 Michael Arrington, the driving force behind the popular tech blog TechCrunch has a thought provoking article today, entitled “Three Reasons Why Netbooks Just Aren’t Good Enough.” In a nutshell, he says they’re underpowered and that the keyboards and screens are too small.

Fair enough, but you’ll notice he doesn’t say exactly what they’re not good enough for in the title. If you want a computer with a large screen, big keyboard, and powerful processor, then a netbook is absolutely not the right machine for you. But good luck finding a 2.6 pound computer that will let you access the internet, run MS Office or OpenOffice.org and perform other basic tasks for under $400 that meets all of Arrington’s demands.

Arrington also gets at least 6 things wrong about netbooks in his article, which tells me that his ideas aren’t exactly backed up by serious research:

Look, I understand that netbooks aren’t for everyone. Some people are going to find them too small or too slow to be useable. So no, I don’t think they’re poised to conquer the world and replace traditional notebooks. I suspect that most people who pick up a netbook will use it as a secondary computer, one that’s easier to travel with than their larger laptop. But you know what? It seems to appear that there’s a market for that. And some people will certainly find that it meets all their needs.