You can’t swing a dead cat5e cable around without hitting an Android tablet these days. It’s almost hard to believe that tablets weren’t always part of the Android landscape.

I mean, there were some attempts to put Android on all kinds of platforms in those early days. Later there were a few large-screen Android tablets that actually launched… to a less than enthusiastic marketplace. Then the iPad came along and things got real in a hurry.

The progression from smartphone OS to tablet OS to mobile OS for screens of any size may seem a natural one in hindsight. It didn’t look that way at the start. Back in the spring of 2010 I wrote a story speculating whether Android had a future on non-phone devices given Google’s general attitude toward them. By that fall, everything changed. 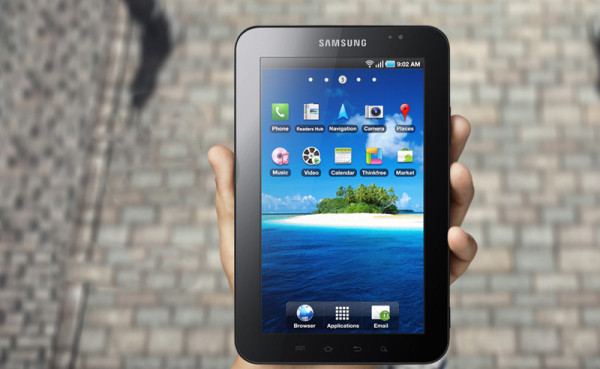 The Galaxy Tab was not the first Android tablet nor even the most hyped of the early efforts at putting Google’s OS on a larger screen. What makes it important in Android’s history is that it was the first tablet sanctioned to include the Android Market (before it was called the Play Store. That upped it’s legitimacy big time.

Prior to the Galaxy Tab, other devices with screens larger than 5 inches couldn’t get the official Google stamp of approval that gave access to the Android Market and core apps like Gmail, Maps, plus a few others the search giant reserved for certified devices.

The official line was that Android wasn’t ready for tablets and apps wouldn’t look or run right on big screens. Behind the scenes, the checklist of Must Have Features to get Google certified included the ability to make phone calls — who would do that on a tablet? Early Android slates floundered in part because they lacked good app selection. Samsung wasn’t about to have it go down like that.

The Galaxy line of smartphones were doing quite well, so it was clear Samsung had a good handle on this Android business. I’m sure the tablet team was confident they could deliver good hardware, but for the device to be successful the company needed good software, too. Samsung got the Galaxy Tabs certified somehow — probably because they could make phone calls in Europe and Asia, though not in the US — and was able to launch the first Android tablet with the Android Market on board (officially). That was just step one.

Step two was developing pre-loaded apps that took advantage of the bigger display and the Tab’s tabletyness. Whatever way you feel about TouchWiz today, you have to give Samsung credit for being forward-thinking enough to modify Android to make the experience of using it on a 7-inch screen different and better than using it on a 3.5-inch one.

Several of the software enhancements on the Galaxy Tabs made their way into Honeycomb (Android 3.0), the first version made specifically for tablets. And the Tabs were among the first Android slates that could truly compete with the iPad for mainstream consumer attention despite being 7-inch tablets instead of 9.7.

We may even have Samsung to thank for the fact that many of the best Android tablets to come out since 2010 are smaller, 7-inch ones and not of the larger variety. After the Tab, non-phone devices with the Market were a lot less rare. 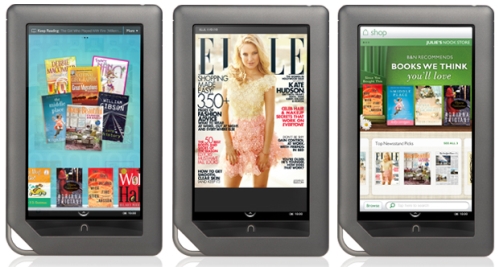 Barnes & Noble launched the Nook Color around the same time as the Galaxy Tab, but the approach was very different.

Unlike the Galaxy Tab, which cost $400 plus whatever carriers charged per month for the data plan, the Nook Color came in at a reasonable $250. Plus, it had B&N’s brand recognition behind it and you could play with it in Barnes & Noble stores around the country.

The Nook Color attracted attention from several different quarters. People who wanted a tablet but couldn’t afford the $500 iPad found the price attractive. Readers loved the idea of a tablet that was as designed for reading eMagazines as well as eBooks. Hackers and tinkerers liked the idea of an inexpensive, easily rootable Android tablet to play around with. So what if it didn’t have cameras or Bluetooth or GPS or mobile data or access to the Android Market?

The Nook Color had several positive effects on Android and Android tablets. The big one: price. Today we expect 7-inch devices to cost less than $250. And though now tablets at that price have the same basic list of specs as ones that cost $400 or more, the Nook Color proved that a slate didn’t need all the same features as a phone to be a success–something Amazon would take advantage of with the Kindle Fire not too long after.

Amazon also followed Barnes & Noble’s lead when it came to designing an interface for the Fire. Even Google paid attention. Some of the tablet-specific interface elements found in the Nook Color also ended up in tablet-ready versions of Android. 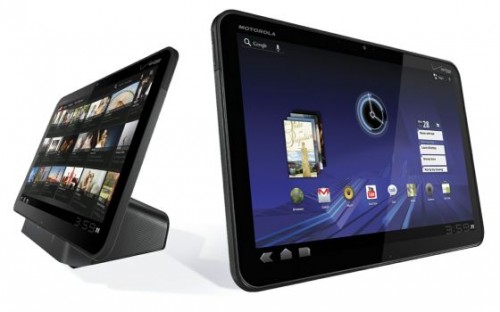 When Google finally decided to fix the problem of Android’s lack of tablet-readiness, the company chose Motorola to create the flagship device. The Xoom wasn’t technically a Nexus device, but did enjoy similar treatment from Google when it launched with the new Android 3.0 Honeycomb OS.

It also showed where the Android team’s collective head was in how they conceived of the ideal tablet. It had a 10.1-inch display instead of a 7-inch one, an HDMI-out port, and privileged landscape mode over portrait.

The Motorola Xoom was not a runaway success (and honestly, neither was Android 3.0 at first), but it did set the tone for Android tablets to come. Especially 10-inch ones. And Honeycomb was an important step forward for Android. The infrastructure gave developers the tools to take advantage of larger screens without having to be a multinational manufacturer like Samsung. 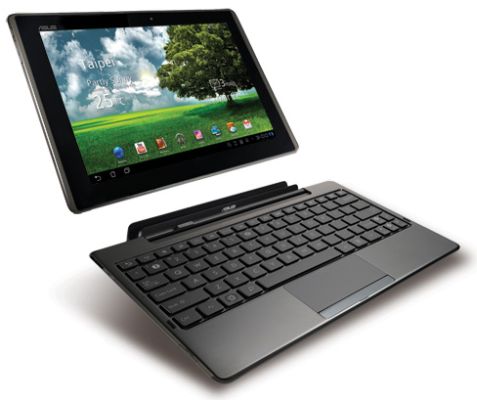 A more successful Honeycomb tablet came in the form of the Transformer. ASUS had long reigned in the world of netbooks and the Eee PC line was a big success. Netbooks started to feel the pinch from tablets soon after the iPad came along, so ASUS made an astute decision. If consumers had the perception that tablets were superior to netbooks, why not give them a netbook-ish tablet so they could have both portability and productivity?

Even today Android isn’t an ideal computing platform and back when Honeycomb was new things were worse. Good thing the Transformer, and devices like it, got popular enough that Google and Android developers had to pay attention. Even with this gripe, the actual user experience on the Transformer rocked–click on the keyboard dock and you’re connected, mouse and all, with no pairing or timeouts to worry about.

The Transformer changed more than Android, in the end. Just look at the number of tablets with docks available running Google’s OS and/or Microsoft Windows. Yes, the concept had been floating around for a while (Lenovo’s U1 Hybrid made it’s second appearance at CES that same year yet never materialized…), but ASUS made it happen and made a good case for Android as a tool for creators and consumers. 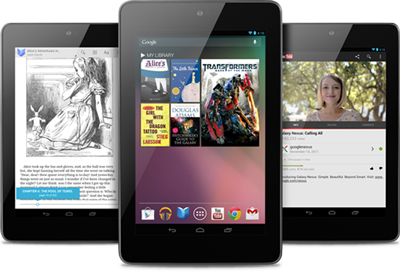 At the 2012 CES, ASUS garnered a lot of attention with it’s tablet lineup. A family of products that included a 7-inch products called the Eee Pad MeMO ME370T that had a great screen, fast processor, and was supposed to cost just $250. At the time, this was a big deal.

Only Barnes & Noble and Amazon had managed to make decent tablets at that price and they did so by leaving off cameras, GPS, and other non-essential features. The Eee Pad laughed in the face of that, offering cameras and Tegra 3 and GPS and more. Lots of people got excited. And then the Eee Pad mysteriously disappeared.

Actually, it wasn’t mysterious. There were rumors and leaks all over the place about how Google execs saw the Eee Pad, loved it, and wanted ASUS to make the first Android Nexus tablet based on it. Except Google wanted it to cost $200 instead of $250. Dilemma! ASUS rose to the challenge and got it done and the Nexus 7 was born.

This tablet did include a few compromises–one camera, less than premium build quality, screens that sometimes just died mysteriously!–but on the whole proved impressive for the price. And it had the advantage of being a Nexus device, as close to Google as you can get software-wise. It also launched with the brand new Android version 4.1, Jelly Bean. And it came with an unlocked bootloader, making it friendly to rooters and hackers and developers and mainstream users alike.

Looking back, this is the real moment that Android became a true mobile operating system for phones, tablets, and other devices alike. Honeycomb and the Xoom were a prequel, if you will, to the Nexus 7’s New Hope.

In fact, you can trace the Nexus 7’s roots back through the four tablets listed here. When Google decided to make a tablet and put the Nexus name on it, they chose the 7-inch form factor, insisted on a low $200 price point, featured an operating system designed to take advantage of all the screen’s pixels, and partnered with a manufacturer with a long, successful track record in making inexpensive, awesome mobile computing devices.

How will tablets change Android over the next five years? The answer to that is already shaping up.

After years of false starts, there now now finally some viable-looking Windows/Android hybrid tablet/laptops coming to market. And with smartphone screens getting bigger, we may start to see some real melding of phones and tablets beyond what exists today in Europe and Asia. In the near future, the smartphone will probably continue to be the leading Android device. In another five years, who knows?

7 replies on “5 Tablets that changed the Android landscape”