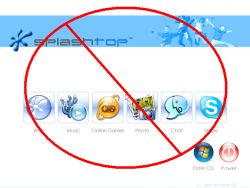 Boot time matters, especially when it comes to laptops and netbooks. Today, when you pull a netbook out of your bag and hit the power button, it can take anywhere from 25 seconds to 2 minutes to load a working Windows or Linux desktop. In the not too distant future, that figure could be as low as 5 seconds.

Two Intel engineers recently demonstrated an Eee PC with modified software that could boot a full operating system in a matter of seconds. They first showed that you could boot a version of Fedora Linux and then a version of Moblin, both tweaked for 5 second boot times.

Because the demo used an Eee PC with a solid state disk, the engineers say that boot times will be slower on a system with a hard drive. And while the network manager loads in the first 5 seconds, it might take a bit longer to actually connect to a netowkr. But the demonstration is still pretty impressive, especially at a time when other software developers are working on SplashTop and ExpressGate style systems that let you load a stripped down Linux-based OS in just a few seconds.

The difference between the 5-second boot and SplashTop is that SplashTop is designed to be used in partnership with a full desktop operating system. You can launch SplashTop any time you just want to use a web browser, Skype, or image browser without waiting for the PC to fully load. The Intel demo shows that it’s possible to load a full desktop in the same amount of time, which could potentially make SplashTop obsolete before it’s even been widely adopted.

It’s not like you can get a 5-second boot time without making some compromises. But most of the items the Intel engineers trimmed are things nobody will miss. For example, a typical Fedora bootup spends 2 minutes on setting up a mailserver. Ubuntu normally spends 2.5 seconds adding drivers for restricted-license devices, even if you’re running it on a computer that doesn’t need those drivers.