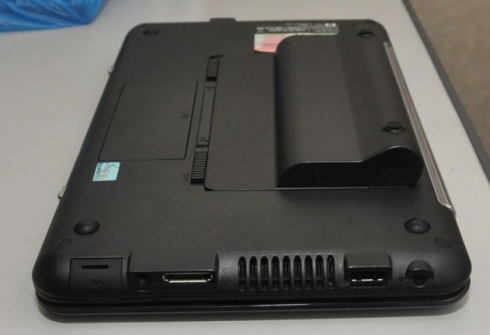 The HP Mini 1000 may be one of the thinnest netbooks ever released, measuring less than an inch thick all the way around. But that thinnest comes at a price. For one thing, the netbook ships standard with a 2300mAh, 26WHr battery that only runs for about 2 to 2 and a half hours. HP does sell an extended battery, but Netbook Philippines administrator Ranns decided to try a third party extended battery instead.

The third party battery, which he picked up on eBay, is rated at 5200mAh and 57WHr, which gives it a bit more oomph than the extended battery you can get from HP. But it also takes up a bit more space than the 4400mAh battery from HP. And that battery was already pretty ugly. The unofficial battery sticks out like a couple of sore thumbs affixed to the bottom of this otherwise sleek-looking netbook.

On the other hand, how often do you look at the bottom of a netbook? The battery does provide a bit of tilt to the keyboard when you’re typing, which many people like. And most importantly, it should give you about twice the run time you’d get from a standard 26WHr battery.