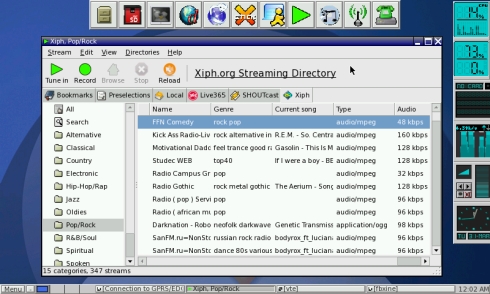 The Linux distribution that comes with most versions of the 3K RazorBook, Alpha 400, and similar Xburst-powered mini-laptops is a bit limited, to say the least. While it comes with a web browser and a few other utilities, adding third party applications can be a chore.

Last month we mentioned an alternate Linux distribution called 3MX that makes the Xburst netbooks feel a bit more like real computers. It comes with a web browser, media player, instant messenger, word processor, and bittoreent client, among other things. But back in March there were still a few kinks to work out, and not all of the hardware worked out of the box.

But the latest version fixes all of the major issues. 3MX release candidate 3.1 adds support for auto-mounting USB devices and SD cards, WEP and WPA WiFi security, and even support for some USB 3G modems.

Of course, the operating system is still only part of the story. These XBurst netbooks stll have slow 400MHz processors, tiny keyboards, and low resolution 7 inch, 800 x 480 pixel displays. But if you’re looking for a dirt cheap ultraportable computing device for under $200, you could probably do worse.

One reply on “3MX Linux for RazorBook/Alpha 400 updated”