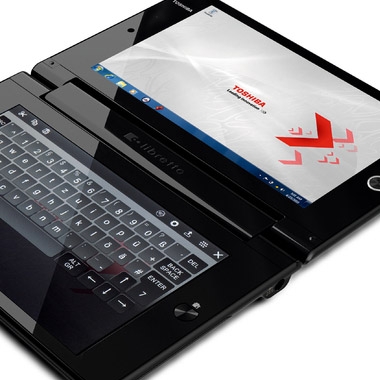 Toshiba’s Libretto W100 is one of the most interesting computers to hit the market in the last few years. At first glance, it looks like a rather chunky 7 inch netbook. Then you open it up and realize that instead of a keyboard and display, there are two touchscreen displays, with the lower screen serving as a virtual keyboard when necessary.

Now it looks like there’s an option for people looking to spend a little more money on this tablet/notebook hybrid device. The folks at Netbook Italia noticed that there are two different models on sale in Italy and some other countries. The Libretto W100-10C is the same model we’ve come to know and love with WiFi and Bluetooth capabilities. But there’s also a Toshiba Libretto W100-10D model with a a 3G HSDPA modem.

According to Netbook Italia, the 3G version goes for about 200 Euros more in Italy than the basic model.

I also found a product listing for the W100-10D on a Toshiba Middle East page, so it looks like the laptop isn’t a European exclusive, but I haven’t seen any info on a 3G capable model for the US yet.