When Apple introduced the “new iPad” with a retina display a few months ago, the company didn’t discontinue the iPad 2. Apple just made it cheaper, knocking $100 off the base price and offering the iPad 2 for $399 while the new iPad starts at $499.

But it turns out Apple didn’t just lower the price. The company also gave the iPad 2 a slight processor bump — and it turns out that may have had a major impact on battery life. 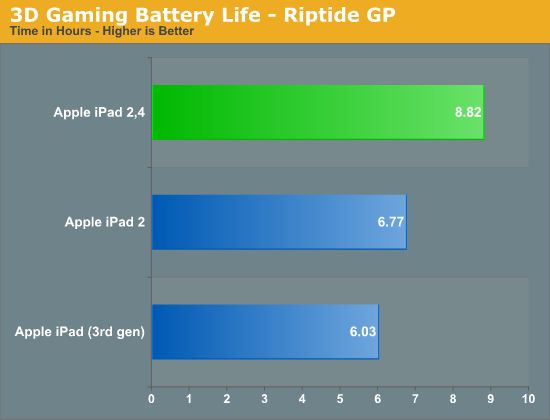 AnandTech has done a thorough review of the new iPad 2, and the site concludes that the new  32nm HK+MG A5 processor is more energy efficient than the A5 chips found in older iPad 2 models.

In AnandTech’s tests, the new iPad 2 managed to get between 15 percent and 30 percent better battery life than its predecessor. The gains vary depending on what you’re using the tablet for. You’ll see the most improvement while playing games, and less benefit while surfing the web.

Both tablets generally get longer battery life than the new iPad, despite the 3rd generation iPad’s larger battery. That’s because the new model has a much higher resolution display and a faster graphics processor that goes along with it.

Unfortunately Apple mixes the new iPad 2 in with older models and you probably won’t know which one you’ve got until after you’ve already paid for the tablet, opened the box and turned it on.