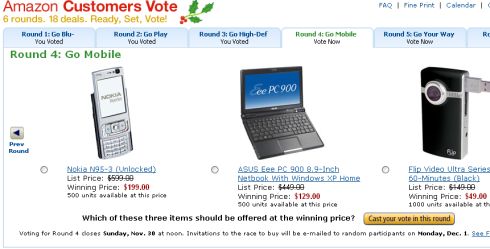 Amazon’s annual “Customers Vote” holiday promotion is under way. Here’s how it works. You visit the Customers Vote page and look at 6 sets of three potential deals. Pick the deal that you’d be most likely to purchase, and if your bargain wins, Amazon will offer a limited quantity of that item at that price.

In previous years, this promotion has led to Amazon’s servers getting hammered and items selling out while customers were still hitting their browser refresh buttons. So Amazon has settled on a plan where the company will email some people who participated in the voting round to let them participate in the buying round which starts on Thanksgiving. In other words, there’s no guarantees that you’ll be able to pick up the items at the listed prices even if you vote for the winners.

Now, what kind of discounts are we talking about here? Pretty major ones. For example, there’s a Sony Blu-Ray player that normally sells for $299 that could go for just $99. Probably one of the most exciting offers is for a $129 Asus Eee PC 900. Sure, this is the model with an older 900MHz Intel Celeron CPU, but typically the Eee PC 900 costs $300 or more, making this one heck of a deal.

So go ahead and cast your vote now.