The Asus MeMO Pad Smart ME301T is a 10 inch tablet with an NVIDIA Tegra 3 quad-core processor, a 1280 x 800 pixel display, and Android 4.1 Jelly Bean software. It’s sort of what you’d get if you took a Nexus 7 tablet and gave it a larger screen (and replaced Android 4.2 with an Asus-customized version of Android 4.1.

And like the Nexus 7, the Asus MeMO Pad ME301T is a relatively inexpensive tablet. It’s expected to sell for $299 and up when it hits the streets in the US on March 5th.

Update: It looks like the tablet is already available from a number of retailers including J&R and Newegg. 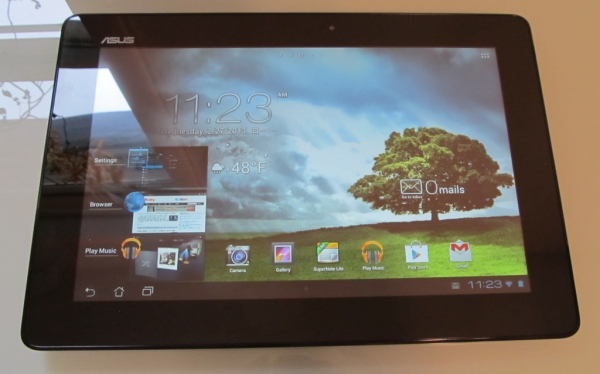 Asus sent me a demo unit to review, and I’ll have some more impressions to share once I dig my way out of a backlog of review units.

But in a nutshell, the tablet appears to have a decent display with wide viewing angles, a responsive multitouch touch panel, support for HD video playback, and basically the kind of performance I’ve come to expect from the Nexus 7… just on a bigger screen.

The tablet features WiFi, Bluetooth, 1GB of RAM, and 16GB of storage. It has a Tegra 3 processor clocked at 1.2 GHz, and SRS audio.