Ever wish eBook readers had two screens so you could open them up like a real book? Me either… but that’s because I use my Kindle for reading text. But if you’re reading graphic content like manga or other comics, you might be missing out on the full experience of viewing imagery that’s meant to span across two pages.

Progress Technologies has a solution: they’ve launched a Kickstarter campaign for a dual-screen eReader called the eOneBook. It has two E Ink displays. It even comes with all 18 episodes of the popular Fist of the North Star manga pre-loaded.

There’s just one catch: that’s all it’s designed to read. There’s officially no way to load any other content. In other words, the Fist of the North Star Full Version eOneBook doesn’t just look like a paper book, complete with a book cover and paper sides. It’s meant to display the same content every time you open it, just like a paper book. 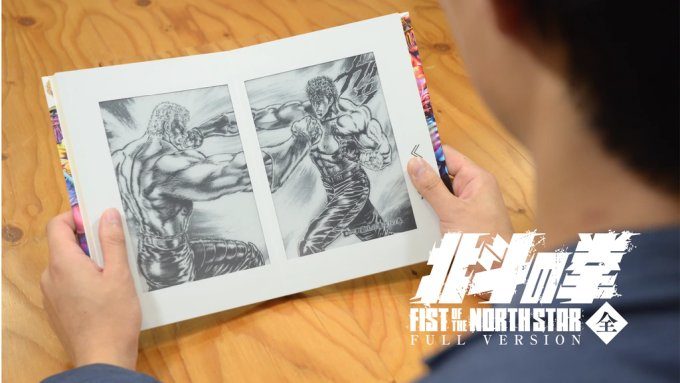 In some ways, this makes plenty of sense. For $250 you get a single book-sized device that takes up a lot less space than 18 volumes of the manga. And if you assume each volume sells for about $20, it’s cheaper to buy this eReader than the complete set of books.

Plus the digital versions are available in both English and Japanese.

On the other hand, it seems kind of crazy to sell an eReader that doesn’t support downloadable content. The developers are trying to paint the bug as a feature it’s simple to use, doesn’t require any setup, and there’s no need to login to a service or connect to a WiFi network to download content. In fact, it’s not even clear if the eReader supports WiFi.

There’s not even a USB port: it runs on four AAA batteries.

The software is also so simple there’s no bookmark feature. The eOneBook is designed to remember your last page read. But if you decide to skip ahead or back, you’ll have to fiddle with some buttons to find your place again… assuming you remember the page number you want to get back to.

Overall, it’s an interesting use of existing technology to create something new that emulates something very old. But it seems like a product that’s going to have a very small market.

It does apparently have some market appeal though: the crowfunding project had a goal of $27,000 but the campaign has already raised more than $170,000 from more than 650 backers.

The eOneBook is expected to ship in April, 2018.