The Poly Keyboard is a DIY project to create a keyboard with tiny OLED displays beneath each key, allowing you to switch languages, layouts, or other functions via software.

It’s been under development for a few years, but this month the creator of the project assembled the first functional prototype of the keyboard… or at least of the left side of what will eventually be a split keyboard. 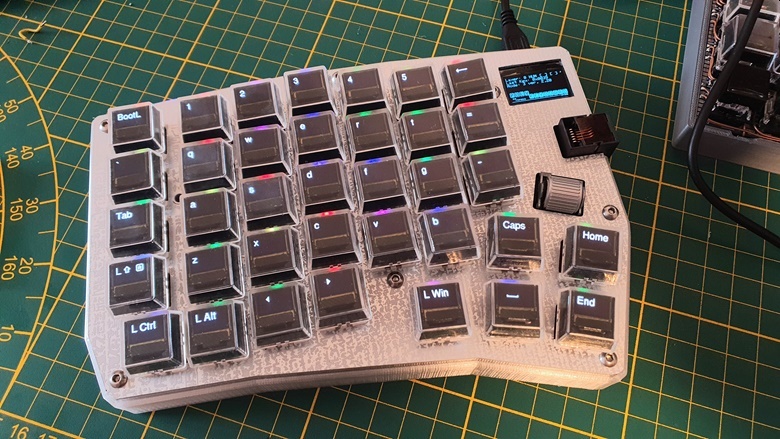 A short demo video shows the key labels changing when a user presses the Caps Lock key. But theoretically this sort of screens-as-labels design would also allow you to change languages, switch to a Dvorak layout or a different arrangement of keys, or highlight just the keys you need for a game, video editing application, or other software.

It’s not the first time we’ve seen a keyboard-with-screen-as-keys design, but Poly is certainly one of the more intriguing entries in this space. It’s an open hardware design: the PCB design, 3D printer files for keycaps, and other files are available at GitHub. And the firmware is based on the open source QMK keyboard firmware.

While the project was originally designed to use an STM32F407 microcontroller, prices went up during the pandemic and ensuing supply chain shortage, so the Poly Keyboard now is now powered by a Raspberry Pi RP2040 microcontroller.

Under each of the keys is a 0.42 inch black and white mini OLED display with a resolution of 72 x 40 pixels.

You can find more details about the project by following the developer’s progress on Twitter or in a series of ports on a Ko-fi page.

via NotebookCheck and Keyboard Builder’s Digest