Last summer Nothing launched its first product, a pair of true wireless earbuds with active noise cancellation, a $99 price tag, and an unusual design that incorporates transparent materials.

This summer Nothing is expected to launch its second product: a smartphone. While full details won’t be revealed until July 12, Nothing has given us a first look at the phone’s design… or at least its back cover. Like the Nothing ear (1), the upcoming Nothing phone (1) will incorporate transparent materials. But it’s not entirely clear why. 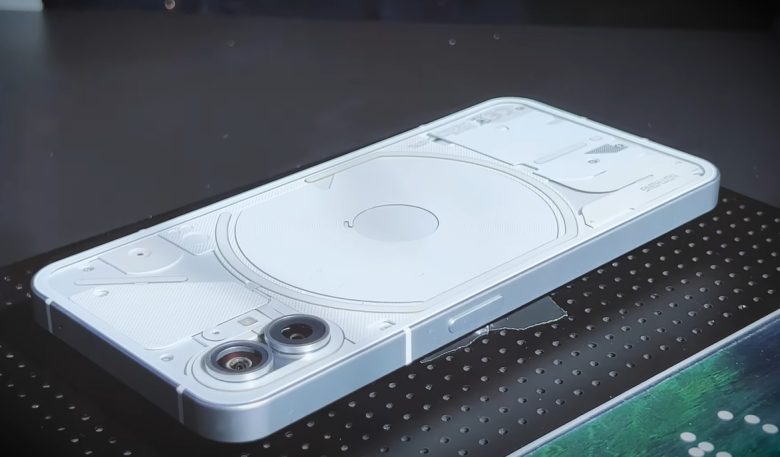 That’s because the back cover may be see-through, but Nothing appears to have covered most of the phone’s key components, making it difficult to see what’s actually inside. That said, it seems pretty obvious that the smartphone has two rear cameras and a wireless charging coil. There are also what appear to be a couple of light strips that could give the phone a distinctive glowing design.

Update: Nothing isn’t letting people actually hold the phone yet, but the company did show off the phone behind glass at an event in Germany, and the lighting effects do certainly give the phone a distinctive look.

Nothing has already confirmed that the phone will be powered by a Qualcomm Snapdragon processor, although we don’t know which Snapdragon chip it will use yet. And it will run Nothing OS, which is basically a customized version of Google Android with the tweaks including the Nothing Launcher (which is already available for download from Google Play and ready for installation on other phones running Android 11 or later).

There’s no word on pricing, availability, or other specs yet. But one thing is clear about Nothing: founder Carl Pei is drawing from the same publicity playbook that he used at his former company, OnePlus. Nothing has been slowly building hype for its upcoming phone by revealing one small details at a time rather than all at once… giving the phone a bit of an air of mystery. Whether that will translate into desirability remains to be seen.