About a year after launching the Hisense Touch portable music player with Android-based software, an E ink display, and support for 32-bit/384 kHz HiFi audio, Hisense has unveiled a new model called the Hisense Touch Lite.

At first glance, the new model looks a lot like the original, but it cuts a few corners in order to drop the price… a little. While the Hisense Touch sells for around $330 and up, the Hisense Touch Lite starts about $299. 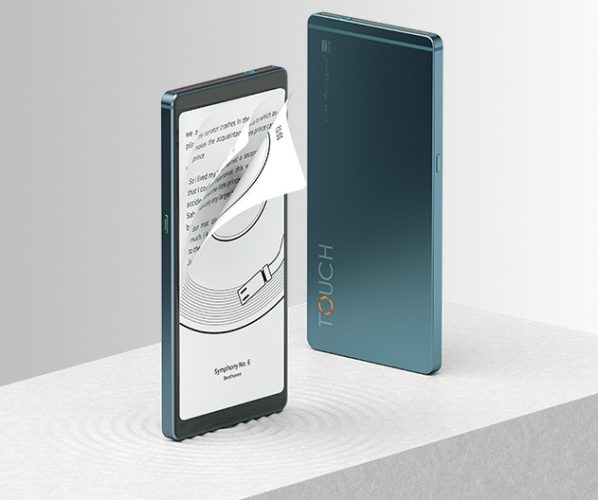 The Hisense Touch Lite features a 5.84 inch greyscale E Ink display with a front light that supports adjustable color temperature and it ships with Android 11 software and the Hisense Touch OS, which is an Android user interface optimized for ePaper displays.

Like the original Hisense Touch, this model has a 1.8 Ghz octa-core Qualcomm processor, 4GB of RAM, a 3,000 mAh battery, a USB 3.1 port, stereo speakers, a headphone jack, and an aluminum body.

What makes it different is that while the Hisense Touch has 128GB of storage, the Touch Lite has just 64GB. It also comes with a 10W charger instead of 18W, lacks a front-facing camera, and perhaps most importantly, seems to lack the HiFi audio capabilities.

On the one hand, that could make this model extremely less attractive to audiofiles. On the other hand, not everyone can really tell the difference between high HiFi and standard quality audio, so if you score middle-of-the-road on an audio quality hearing test, then maybe you save $30 or so on the cheaper model.

The E Ink display should still serve its basic purpose of giving you a sunlight-viewable screen with low power consumption for a device primarily meant for playing audio, reading eBooks, or running other apps that don’t require a full-color display with a high refresh rate.

Note that while the Hisense Touch and Hisense Touch Lite ship with Android, they’re designed for the Chinese market and do not come with the Google Play Store installed. If you want to run apps that aren’t pre-installed you can either sideload them or install an alternate app store like the Aurora Store.

via Good EReader (which is the only website that suggests the Touch Lite has 2GB of RAM instead of 4GB), JD, and smzdm