Apple’s M1 line of processors dramatically changed the game when they first debuted in 2020, offering better performance-per-watt than anything available than competing chips by a wide margin. Now the company is kicking off its next generation of Apple Silicon with the launch of the its first M2 series chip. 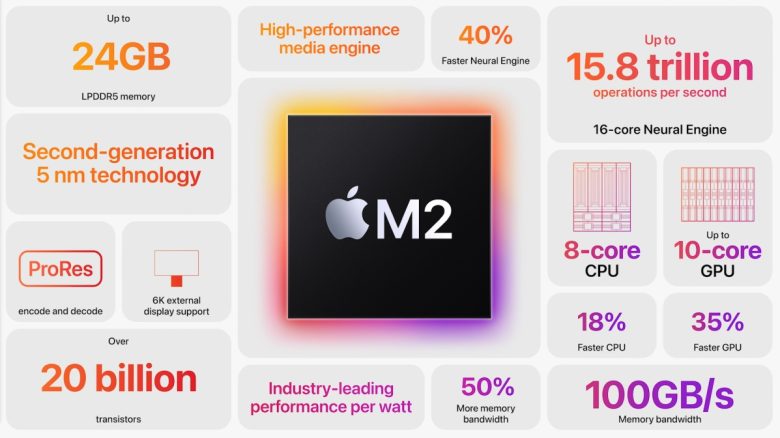 Apple says the new processor is a 5nm chip that features:

There’s also now support for up to 24GB of LPDDR5 memory (which is 8GB more than the original Apple M1 chip supported) and 100GB/s memory bandwidth (which is a 50% improvement).

Apple says a new its M2 processors also include the ProRes video engine with support for multiple 4K and 8K video streams and a new higher-bandwidth video decoder with support for 8K H.264 and HEVC video.

Apple will most likely offer M2 Pro, M2 Max, and M2 Ultra processors that offer even more performance, but the first M2 processors will debut in thin and light notebooks that balance performance with low power consumption.

Apple’s new MacBook Air and MacBook Pro 13, which hit the streets in July, 2022 with prices starting at $1199 and $1299, respectively, and Apple is promising up to 18 hours of battery life during video playback on the former, which is also a fanless notebook that weighs just 2.7 pounds and which measures just 11.3mm thick.