AMD says its first graphics products based on RDNA 3 GPU architecture will debut later this year when the first Navi 3X GPUs arrive. And next year we’ll see the first mobile chips with RDNA 3 graphics baked in, when AMD launches its Phoenix Point processors that pair Zen 4 CPU cores with the company’s new graphics architecture.

So what can we expect from RDNA 3? According to AMD, a lot. 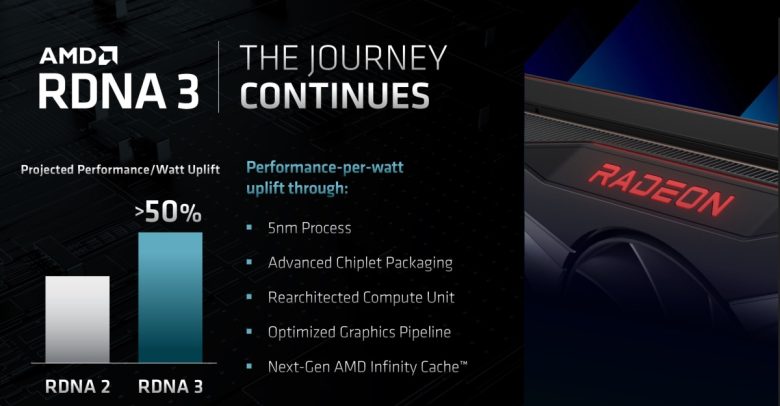 The company says its next-gen GPU architecture will deliver a 50% improvement in performance-per-watt compared with RDNA 2. That means the company will either be able to deliver 50% more performance without increasing power consumption, or RDNA 2-level graphics performance in energy-efficient designs that consume half the power.

That bodes well for Phoenix Point and other upcoming mobile processors expected to ship with RDNA 3 integrated graphics, since they’ll be able to offer better graphics performance without taking a significant toll on battery life. 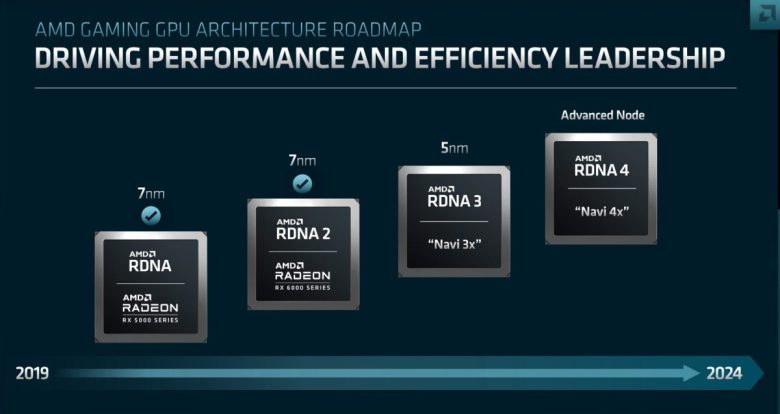 AMD hasn’t provided a lot of details about how it’s going to deliver on that promise yet, but the company has dropped a few clues. First, RDNA 3 GPUs will be manufactured on a 5nm process, compared with the 7nm process used for RDNA 2. Second, the company says the new GPUs will use “next generation AMD Infinity Cache technology,” for increased memory bandwidth, and a chiplet-based design.

The move from a single-chip solution to a series of chiplets, which allows AMD to manufacture a series of small specialized chips for different functions and then put them together into a combined package.

The chip maker has also hinted that RDNA 4 graphics architecture will debut in Navi 4x GPUs sometime by the end of 2024, but the company hasn’t made any performance claims yet.

press release via AnandTech and Guru3D