The makers of the Banana Pi line of single-board computers clearly draw a bit of inspiration from the Raspberry Pi Foundation when it comes to naming their products. Some of their designs are also rather obviously Raspberry Pi inspired.

Case in point: the upcoming Banana Pi BPI-CM4 compute module doesn’t just look like a Raspberry Pi Compute Module 4, it also features the same connection pins, which means that it should work with carrier boards designed for the Raspberry Pi CM4. But that doesn’t mean the two compute modules are identical. 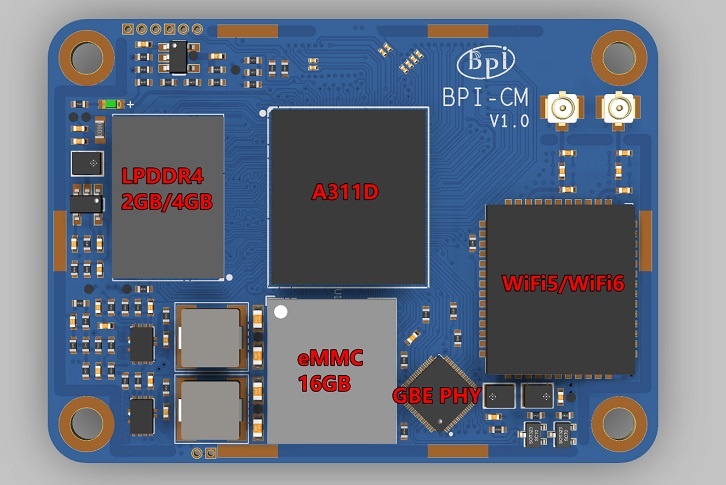 While the Raspberry Pi CM4 is powered by a Broadcom BCM2711 quad-core ARM Cortex-A72 processor, the Banana Pi BPI-CM4 features an Amlogic A311D chip, which features:

Other features include a PCIe expansion interface, support for Gigabit Ethernet, and an HDMI interface with support for up to a single 4K display (a Raspberry Pi CM4, by comparison, supports up to two displays). There are also CSI and DSI connectors for cameras and displays.

Pricing and availability details haven’t been announced yet, but the fact that we’ve only seen rendered images rather than real-world photos suggests that it could be a while before the BPI-CM4 is ready to ship.