The makers of the AYA Neo and AYA Neo Next handheld gaming PCs have introduced a new model featuring an OLED display and a smaller, lighter design. The AYA Neo Air weighs less than 400 grams (14 ounces) and is nearly as thin as a Nintendo Switch Lite.

But unlike a Switch, this is a full-fledged Windows computer with an x86 processor and the ability to run PC games. The AYA Neo Air is also expected to be one of the most affordable devices from AYA to date. It’s set to launch later this month, but AYA has already provided some details about the upcoming handheld.

AYA hasn’t revealed the processor used in the little computer yet, but the company has indicated that it will be a Ryzen 5000 chip capable of handling many indie games at 1080p resolution and AAA titles running at 720p.

The processor is likely likely set to run at 12 watts in order to balance power consumption and heat generation. And since AYA has indicated that the price will be competitive, there’s good reason to think that it could be a Ryzen 3 chip with Radeon Vega graphics rather than a higher-performance Ryzen 5 or 7 series processor. 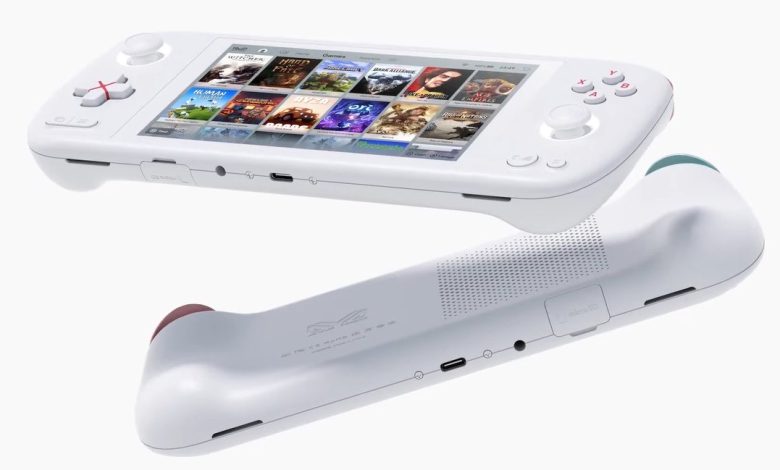 Pictures of the AYA Neo Air reveal that it will have two USB-C ports, and AYA says it’s powerful enough to use as a PC if you use them to connect a keyboard, mouse, display, or other accessories. There’s also a headset jack and microSD card reader.

Other features of the handheld are expected to include RGB lighting under the analog sticks and an x-axis linear motor. The OLED display support 107% NTSC color gamut. Independent reports suggest that the display will be a 5.5 inch, 1080p display.

AYA says the Neo Air will be available in black and white color options, as well as other colors that will be announced closer to release.

Chinese PC makers have cranked out a growing number of handheld gaming computers over the past few years. But with the arrival of Valve’s Steam Deck on the scene, their value proposition has become increasingly questionable. Sure, systems like the GPD Win, AYA Neo, and ONEXPLAYER line of devices may have more powerful processors or other bells and whistles that the Steam Deck lacks, but Valve’s handheld has an affordable $399 starting price and AMD RDNA 2 graphics, which gives it the ability to offer higher frame rates in most games.

But the Steam Deck is also a big and heavy device, weighing 1.5 pounds and measures 11.7″ x 4.6″ x 1.9″. That could make it uncomfortable to hold for extended gaming sessions when compared with a more compact device like the Nintendo Switch Lite, which measures 8.2″ x 3.6″ x 1.1″ and weighs about 10 ounces.

If AYA manages to truly deliver a full-fledged Windows PC that’s about the size of a Switch Lite while weighing less than a pound, then there might actually be a reason for some gamers to consider the company’s latest Steam Deck comparison… assuming the price is right.

It’s unclear what the retail price will be in China or the rest of the world, when the Neo Air will ship, or even what the exact specifications of the handheld ar. Despite taking pre-orders, the company still hasn’t confirmed things like which processor the device uses, what the display resolution will be, or how much RAM the Neo Air has.