AMD plans to launch the first Ryzen 7000 series desktop chips later this year, with mobile versions aimed at laptops and other compact computers coming in 2023. But that oversimplifies things a bit, because it turns out AMD will actually be launching two different lines of laptop chips next year.

In addition to the previously expected “Phoenix” chips aimed at thin and light gaming laptops, AMD will launch a line of “Dragon Range” chips for higher-performance gaming laptops. 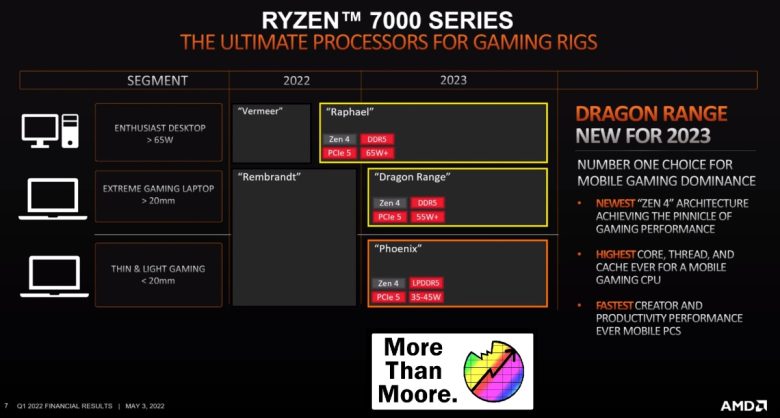 In a nutshell, both chips will use the same Zen 4 CPU cores as the desktop-class “Raphael” processors set to launch this year. They’ll both also support PCIe 5. But Dragon Range chips consume more power and are expected to have higher core and thread counts and/or speeds than Phoenix chips, more cache, and overall higher performance.

They’re also expected to show up in laptops that are more than 20mm (0.78 inches) thick, suggesting it’ll take more cooling power to keep them happy.

Basically, these are chips for the kind of laptops where performance is more important than battery life, and where you’ll probably keep them plugged in most of the time.

In a nutshell, here’s what the Ryzen 7000 lineup looks like so far:

Note that the in the graphic shared by AMD, some chips are described as supporting DDR5 while others show LPDDR5, but Ian Cutress notes that this doesn’t mean they only support those types of memory. So don’t be shocked if a laptop with a Phoenix CPU ends up featuring DDR5 memory or a Dragon Range system supports LPDDR5, for example.