AMD plans to bring better graphics to budget laptops later this year with the launch of a new line of “Mendocino” processors that combine the company’s latest RDNA 2 integrated graphics technology with CPU cores based on AMD’s Zen 2 architecture, which is a few years old at this point.

The upshot is that by providing a mix of new and old, AMD expects Mendocino chips to end up in laptops that will sell for between $399 and $699. And that price point shouldn’t be surprising, because you know what else has a Zen 2 + RDNA 2 processor? Valve’s Steam Deck, a handheld gaming PC that sells for $399 to $649. 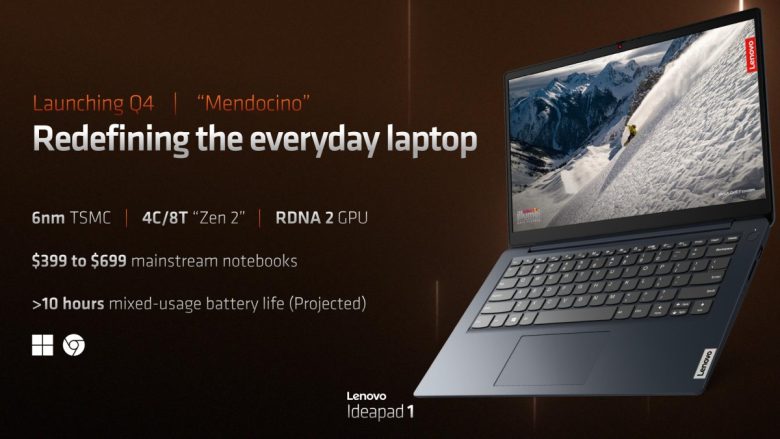 The Steam Deck’s “Aerith” processor is a custom chip that AMD designed for Valve, and it was the first mobile processor to feature RDNA 2 integrated graphics.

Now that AMD’s Ryzen 6000 mobile processors with Zen 3+ CPU cores and RDNA 2 graphics are starting to ship, the Aerith processor still stands out as a low-cost solution that offers strong graphics performance, even if rival handheld makers are hoping that customers would be willing to pay more for systems with better performance.

Still, it looks like AMD’s new Mendocino processors could bring a big graphics performance boost to entry-level laptops, with the company’s RDNA 2 architecture offering performance that rivals an entry-level NVIDIA MX series GPU. As Anandtech notes though, it’s likely that laptops with these chips won’t be targeted at gamers and probably won’t include a high number of GPU cores, but may be able to leverage RDNA 2 technology for energy-efficient hardware-accelerated video encoding and decoding for things like media playback and video chat, among other things.

Update: Rumor has it that Mendocino chips will have just two RDNA 2 GPU compute units. By comparison, the AMD Ryzen 5 6600U processor has six. The Ryzen 7 6800U has twelve. And the Steam Deck’s Aerith chip has eight.

While the company isn’t providing detailed specs or model numbers for the Mendocino chips yet, here’s what we know so far:

AMD also indicated that a Lenovo IdeaPad 1 laptop would be among the first to feature a Mendocino processor.