The Windows Subsystem for Android (WSA) makes it possible to run Android applications on Windows 11 computers. But the software is still very much a work in progress and it’s currently only available to members of the Windows Insider Preview program.

Microsoft bundles the Amazon Appstore with WSA, making it easy to find and install some Android apps – but the selection of available apps is pretty small so far. Fortunately there a multiple ways to sideload Android apps. Now the developer behind one of those methods is introducing a significant upgrade that will bring a new feature: backups. 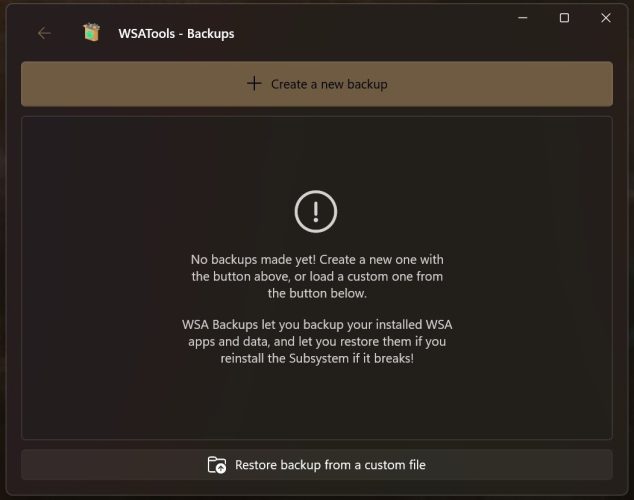 WSATools is a free utility that makes it easy to sideload Android applications on a Windows 11 computer with the Windows Subsystem for Android installed. Available from the Microsoft Store, WSA doesn’t require you to manually install Android developer tools or futz around with a command prompt. Just download an Android APK file from a trusted source like F-Droid, APKMirror or APKPure, double-click it and WSATools will walk you through the install process.

While that dramatically increases the number of apps that you can run on a Windows 11 PC, there are some down sides to sideloading rather than using an app store. You won’t get automatic updates for apps installed using WSATools, so you’ll have to keep an eye out for updates and install the manually. And your data won’t be backed up or restored via the store.

To address the backup issue, WSATools developer Simone Franco built WSATools Backups. It makes a copy of your data that can be saved and restored even if you’ve reinstalled the Windows Subsystem for Android, accidentally wiped app data, or need to restore for any other reason. It could, for example, make sure that you don’t lose your progress in a game, as long as you make regular backups.

The new backup feature is built into WSATools version 0.2.0, which is now available from the Microsoft Store.

WSATools isn’t the only game in town. You can also sideload Android apps on Windows 11 computers using other apps like WSA-pacman and APK-Installer. If you prefer to do things via the command line, you can also do things manually using Google’s Android Platform Tools. And if you’re feeling particularly ambitious, you can try installing the Google Play Store, which is a bit trickier, but which makes Android on Windows feel a bit more like the version of Android that ships with most phones and tablets.

But WSATools is certainly turning out to be one of the more versatile and user-friendly options for sideloading Android apps in Windows PCs.