There’s no shortage of portable monitors that can be used as a second screen for a laptop, tablet, or smartphone on the go. But most stick to the 16:9 aspect ratio commonly found in laptops (and TVs).

The Lukos is a bit different – it’s a portable monitor with a 3840 x 1100 pixel IPS LCD display featuring a 32:9 aspect ratio that measures 14 inches diagonally. It also has kind of a chunky design and a high price tag, but an interesting set of features including the ability to display content from up to four devices at once. 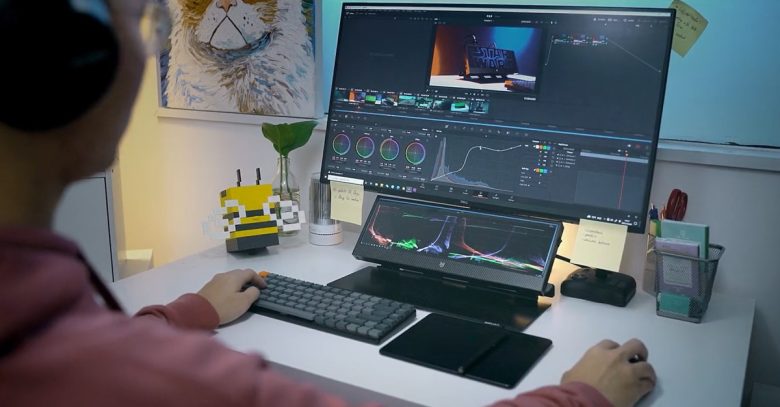 Up for pre-order for $419 and up through a Kickstarter crowdfunding campaign that ends today, the Lukas is expected to begin shipping to backers in April, but it’s always worth taking promises made during crowdfunding with a grain of salt.

Update: The Kickstarter campaign has ended, but folks who missed out can still pre-order through an Indiegogo InDemand campaign that shows an estimated ship date of May, 2022. Or, if you’re looking for something a little more affordable, a number of other 14 inch, 3840 x 1100 pixel displays are available from Chinese sellers for around $150 and up.

The display features 100% sRGB color gamut, 300 nits brightness, a 2ms response time, and a 60 Hz refresh rate. It has stereo speakers. And the Lukos has a carbon fiber case/stand that allows you to adjust the height and angle of the display when you’re using it, or fold it up like a laptop when you’re not, so the base acts like a protective cover when  you want to throw the Lukos monitoer in a bag.

You can also apparently rotate the screen for use in vertical orientation if you want an ultra-tall display for perusing social media or other content that makes sense in a timeline-like view.

In addition to an unusual aspect ratio, the Lukos has an unusually high number of inputs including:

You can use any four of those ports at once to connect up for four devices and view content in split-screen mode with either two virtual 1920 x 1100 pixel screens or four 1920 x 550 displays (which seems a lot less useful, honestly). 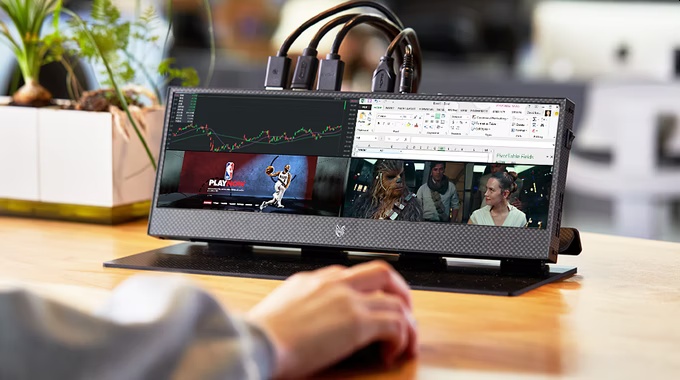 There’s also a 12V DC power input, a 3.5mm audio output, source, volume, menu, and power buttons, and a fan switch that allows you to toggle active cooling when needed. The Lukos also works with a remoter control that lets you adjust brightness, audio, and other settings including split-screen modes without pressing buttons on the display itself.