Windows 11 may be getting native support for running Android apps thanks to a new Windows Subsystem for Android. But it’s not a Google-approved system, which means you may have to jump through some hoops if you want access to the Google Play Store and all the apps in it.

But it looks like Google is working on its own solution that may allow you to stream apps from an Android phone not only to a Windows PC, but also to Chromebooks or Macs thanks to a web app. 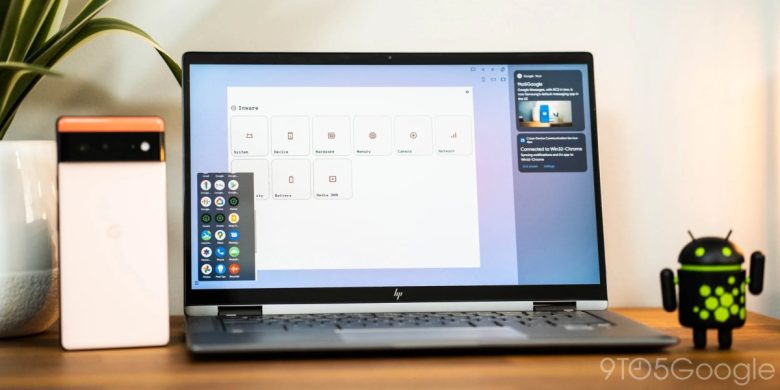 The folks at 9to5Google found two apps related to “cross device services” in the recently released Android 13 Developer Preview for Pixel devices, and discovered that not only does it allow you to stream apps from your phone… but it does it without old school screen mirroring.

Basically the Pixel treats your web browser like a separate display, which means you can keep using your phone for other things, while also viewing notifications or interacting with apps on your computer. The apps are actually running on your phone, but they’re visible in your computer’s web browser, which means you can use chat apps or any other app you want to use with a big screen, keyboard, and mouse.

It’s likely that Chromebook users will eventually get deeper integration into the operating system, without the need to open a web browser. This will allow you to, for example, see smartphone notifications on a Chromebook and then click the notification to open and interact with the related app… something that would be tough to implement with a web browser.

You can see more images plus some short videos showing the cross-device services in action at 9to5Google.

Pixel will be able to stream Android apps to your Chromebook/PC, here’s how it works [9to5Google]

Android 13 may allow you to stream Android apps to a Chromebook, allowing you to do things like chat with contacts using phone apps to a Windows, Mac, or Chrome OS device without installing a Chrome OS version. Here’s an early version in action.

Microsoft will roll out new features to Windows Insiders on the Windows 11 Dev Channel in the coming weeks, including support for app folders in the Start Menu, Taskbar tweaks, and tablet-friendly gestures for opening Start & Quick Settings by swiping up.

As expected, AMD has completed its acquisition of FPGA maker Xilinx ins a $35 billion deal first announced in October, 2020.

FOSDEM 2022 took place earlier this month, and there was a whole track ad the open source developer conference focused on mobile devices. Many of the presentations are now online, and LINMOB has a great run-down of talks worth checking out… plus a links to a bunch of other recent developments in the mobile Linux space.