The first laptops with Intel Arc discrete graphics are expected to begin shipping before the end of March, and now Intel says we can expect to see the first Intel Arc graphics cards for desktop computers in the second quarter of the year with workstation-class GPUs coming in Q3, 2022.

All told, the company says it expects to ship more than 4 million discrete GPUs this year. The chip maker is also laying out a roadmap that promises at least two more big launches coming later on. 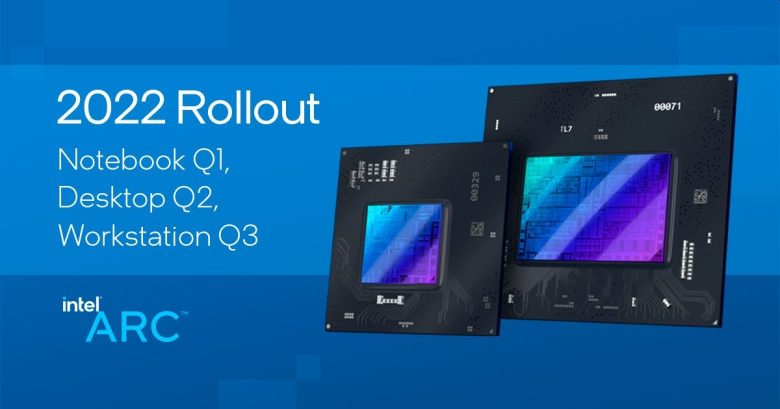 One is a previously undisclosed GPU in the cloud service code-named “Project Endgame,” which Intel says “will enable user to access Intel Arc GPUs through a service for always-accessible, low-latency computing experience.”

This sounds a lot like it could be Intel’s answer to NVIDIA’s GeForce Now game streaming service, which basically lets gamers leverage NVIDIA’s cloud-based servers to play games on a phone or PC with entry-level hardware that might not otherwise be able to handle things like ray-tracing or gaming on a 120 Hz display.

The company also says its begun designing a new GPU architecture code-named “Celestial,” which is designed for the “ultra-enthusiast segment,” suggesting that while the company’s first discrete GPUs (code-named “Alchemist”) may not exactly be NVIDIA RTX 3080 killers, the company does expect to play in that space… eventually. The first Celestial-based GPUs aren’t expected to ship until 2024 at the soonest.

More importantly, given the impact global supply chain issues have had on the availability of NVIDIA and AMD GPUs, the fact that Intel expects to ship any discrete GPUs at all this year is probably good news for folks looking for a bit more graphics horsepower than they can get from systems with integrated graphics alone.

via @IntelGraphics and press release