Google’s Chrome browser for Android has a Lite mode option designed to reduce your data usage by using Google’s servers to compress web content before sending it to your device. First introduced in 2014 as Data Saver mode, the name was changed to Lite mode a few years ago. 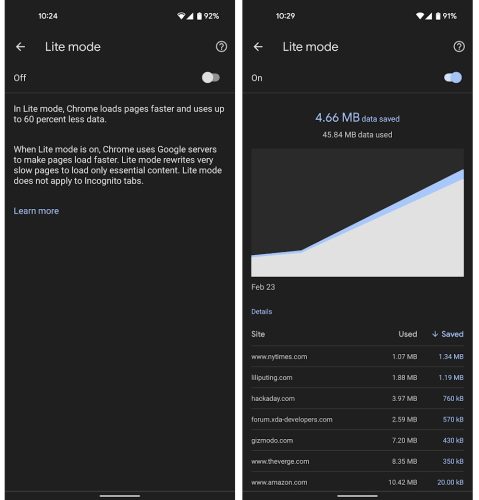 In a post to the Google Chrome Help forum, a Google Chrome Support Manager says that Lite mode will no longer be available when Chrome M100 stable rolls out on March 29, 2022. According to Android Police, hanging onto an older version of Google’s web browser won’t let you keep using Lite mode – it will no longer work in any version of Chrome for Android after March 29, even if there’s still a toggle in your browser.

That’s possible because the feature is powered by server-side compression. Once Google turns off the servers, there’s no way for Lite mode to work at all.

Google says it’s pulling the plug on Lite mode now because it’s no longer as necessary today as it was when the feature was first introduced 8 years ago, because:

Of course the first point will come as cold comfort to folks who aren’t in one of the many countries where data costs are lower today than they had been in the past… or folks who are on data-limited wireless plans for other reasons.