After launching in China last year as one of the first devices with a 10.3 inch E Ink Kaleido color display, the Bigme B1 Pro tablet is now available in the United States. But it’s not cheap.

The Bigme B1 Pro sells for $789 at Amazon (through third-party seller YalaTech). 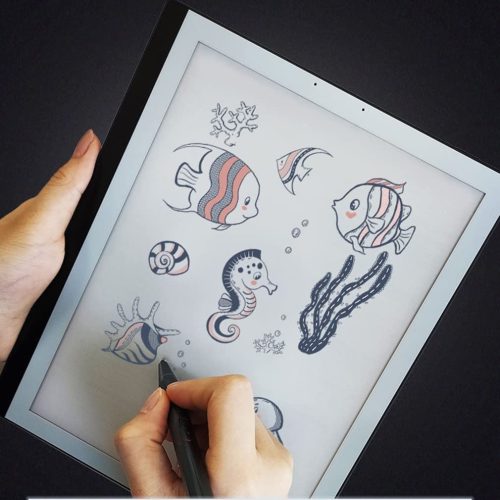 The reason I’m calling the B1 Pro a tablet rather than an eReader is that not only does it have a large color display, but it’s powered by a 1.8 GHz ARM Cortex-A7 quad-core processor, 2GB of RAM, and 32GB of storage and the tablet runs software based on Android 8.0 and supports both finger touch and pressure-sensitive pen input, allowing you to take notes or draw pictures on the screen.

Of course, you can also use it to read eBooks, periodicals, or other content. Just don’t expect this to be the best choice for gaming or video playback: E Ink’s Kaleido color display technology only supports 4096 colors and while you get 226 pixels per inch when viewing black and white content, that drops to 75 pixels per inch for color content. The screen refresh rate is far lower than a typical LCD or OLED display.

That said, the Bigme B1 Pro comes with many of the benefits inherent to E Ink displays including low power consumption, reduce eye strain, and the ability to view the screen using nothing but ambient light (unlike LCD and OLED displays, E Ink screens often look better in direct sunlight).

The B1 Pro also has a front-light system featuring 36 LED lights with adjustable color temperature which should help keep the screen visible indoors or at night.

Other features include a 4,000 mAh battery, a USB Type-C port, stereo speakers, and two microphones that can be used for voice chat or voice assistant software. There’s no microSD card reader.

BigMe also makes a more expensive B1 Pro Plus device with a 1.8 GHz ARM Cortex-A55 quad-core processor, 4GB of RAM, 128GB of storage, and a few other upgrades, but that model does not yet appear to be available in the US.